OPINION: USING HUMOR TO PLAY DOWN HARDSHIP IN NAIJA 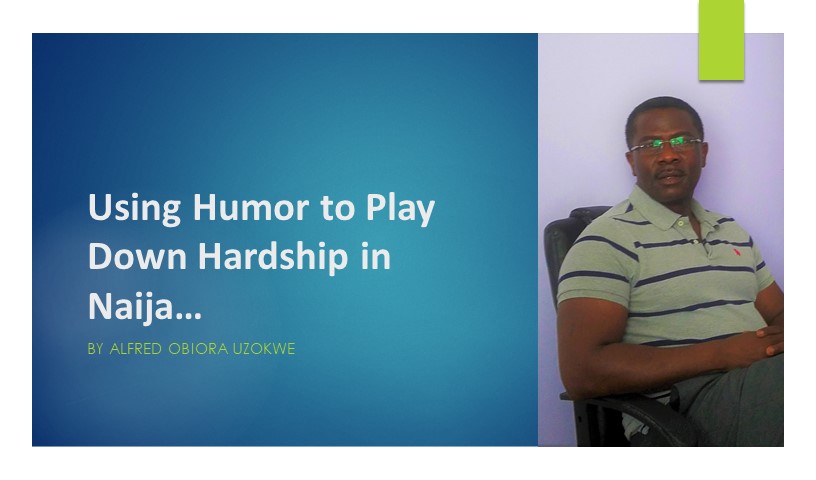 I wrote this article ten years ago but the points made herein are still as germane as then. On this Labor Day holiday – September 7, 2020, I reprint an updated version.

Nigerians were once branded the happiest people on earth. That sounded crazy at the time but if you visit Nigeria, you will know it is true. Years ago, a song penned by the indefatigable Fela Kuti called “Suffering and Smiling”, was used to make the point.  Fela’s song depicted a nation with too much hardship and yet people bore it with a certain inexplicable equanimity.

For example, in Nigeria, a man pulling many times his own weight in goods, with a wooden truck or wheel barrow, under a 95 degree Fahrenheit temperature, with sweat pouring down his face and cascading down his body, would be expected to have a sad disposition on his face. That is not Naija. In spite of the back-breaking work that pays little, the man will be smiling while making jokes with anyone that comes close to him as he makes his way through the busy streets.

People will be in a house without electricity for so long. You would expect them to be VERY mad at a government that continues to fail her people in the power-delivery sector. Or mad at the electricity delivery companies that fail to get their act together. You will hardly see them angry. Instead, they will be making light of the situation by describing the sizes of the mosquitoes that play harmonious music around them in the night that could have been warded off if they had electricity and their fans running. They will be laughing heartily too. In spite of the absence of electricity the previous night, as soon as power is restored, even for the slightest minute, you find them jubilating, “Up NEPA” or “Up PHCN” or whatever company supplies the power. It is amazing!

Nigeria is a nation where people always find a way to cut through the everyday misery they face in traffic, in banks, on dilapidated and pothole-ridden roads to either enjoy themselves or be happy. On a visit to Nigeria, I watched an Okada rider carrying three “passengers”.

One person between him and the motorcycle handles and two people in the back. The lady in the back also had a child tied behind her back! Effectively, the man was ferrying 4-people, with an assumed combined weight of 700 pounds on a motorcycle that was designed for a probable maximum load of 400 pounds.

The fact that he was carrying someone between himself and the motorcycle handles made it difficult, if not impossible, for the okada man to be able to react promptly in the event of an emergency. One would think that the danger that these people were being subjected to would show on their faces as sadness. That was not the case.

They were instead immersed in a conversation that was cracking them up in laughter as the okada “driver “meandered through the bad road, periodically extending one hand to wave at people along the dusty road. The only explanation is that people in Nigeria easily adapt to the situation they find themselves and make the best of it.

On a visit to Nigeria, I went to the bank and saw a long line of people being attended to by only one teller. It meant that one could spend as much as 90 minutes just to make a simple withdrawal. Again, the people in the long queue were busy watching a TV behind the teller that showed some kind of European soccer.

They were heartily discussing the game while the line snailed along. Essentially, people have developed very powerful coping mechanisms to deal with the many twists and turns that they have come to expect. These days, I get jokes through my email that are specifically tailored to Nigeria as a nation and Nigerians as a people.

Apparently, there are Nigerians who have taken it upon themselves to develop, write and circulate these satirical jokes or humor to make light of tough situations in the country hence making them more bearable. I would like to share a couple of the jokes in this article. I am not sure who to give credit for the jokes to but whoever are the originators, credit goes to them.

One of the jokes goes thus: A casket-maker was on his way to deliver one of his caskets when the vehicle he was riding in broke down in a traffic hold up. Sensing that he would be late for the timed delivery, he balanced the coffin on his head and started walking down the highway, towards his destination.

Before long, he got to a traffic checkpoint manned by men of the Nigerian police force. “Where you dey carry that thing go?”, one of the policemen, at the check point, thundered at him hoping to extort some money from him. The man replied, “I no like the place where them bury me, so I dey try relocate”. On hearing that, all the policemen at the check point took to their heels!

Of course the above joke tries to make light of the situation Nigerians find themselves in on a daily basis. If you live in Nigeria, there can be no escape from the harassment and extortion from the police. If you are in a vehicle, they will stop the vehicle and demand money even if you have not contravened any law. In fact them dey carry change now so no excuses from motorists.

Another joke goes thus: A pastor was praying in a church and after the prayer, he said that the Lord told him that the church should sow seed of fifty thousand naira for the next Bishop’s ordination coming up in twenty years. Well, one of the church members wondered aloud, “so this man no believe say Jesus is coming soon”

Well, the above again tries to highlight, in a subtle way, the discrepancy that has now permeated the gospel ministry in Nigeria. Everywhere you go in Nigeria today, there are gospel or evangelical churches preaching just one thing, “sow seed”. They use up sermon time to basically solicit money all the way. They solicit money to build huge, state of the art churches, dress themselves in Hollywood style, ride the best cars, even buy jets, fly around the world.

Yet, another joke goes thus: A man died and went to heaven. There, he found that there were different hells for each country of the world. He then decided to pick the least-painful hell to spend eternity.

The man went to the German hell and asked, “What do they do here?” Someone responded to him, “First they put you into an electric chair for an hour. Then they lay you on the bed of nails for another hour. Then the German devil will come in and whip you for the rest of the day. The man did not like what he was hearing so he decided to move to the next hell station. He then checked the USA hell, Russian hell and others and the story seemed to be the same for all of them.

The attendant replied, “First they put you an electric chair for an hour and then they lay you on a bed of nails for another hour. The Nigerian devil then comes in and whips you for the rest of the day”. Bewildered, the man retorted, “But that is the same type of hell that other nations have but they do not have long queue in front of them”.

At that point, one of the men on the queue pulled him aside and said, “People are rushing to the Nigerian hell because there is never electricity, so the electric chair does not work. The nails were paid for but were never supplied by the contractor so the bed is very comfortable to sleep on and the Nigerian devil used to be a civil servant so he comes in, signs in and goes back home for other business.” Need I say more?

JUST IN: Panic as scores of thugs lay siege to Ondo Assembly