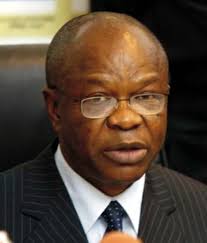 A former Chairman of the Independent National Electoral Commission (INEC), Prof. Maurice Iwu, says the claim by a former chairman of the All Progressives Grand Alliance (APGA), Chief Victor Umeh, in a recent interview against him (Iwu), were full of lies and prevarications.

in the interview, said to be an attack against a former Governor of Anambra State, Mr. Peter Obi, Chief Umeh was quoted to have claimed that he fought Prof. Iwu when the former INEC boss wanted to deny Mr. Obi participation in the 2010 governorship election for the second term.

Chief Umeh was also quoted to have said in the interview that “A truce was brokered because I had a court judgment which Iwu was disobeying when the court had affirmed Chekwas Okorie’s expulsion from the party and Iwu continued to recognize Chekwas to put another candidate against Peter Obi in APGA in 2010. I fought through, won at the Court of Appeal and I was able get Ojukwu’s support for Obi and we won the second term election for him.”

But in a swift reaction to Chief Umeh’s claims, Prof. Iwu said that the content of the interview was sheer falsehood and also misleading.

In a statement by Prof. Iwu to counter Chief Umeh’s claims, he said “I didn’t want to join issues with Chief Victor Umeh regarding his statement about me in an interview he granted to attack Peter Obi.

“However, it is important for the records to categorically refute the falsehood in Chief Umeh’s interview. Perhaps more important is the lesson that leadership is not a business that is measured in transactional terms of profit and loss.

“In the interview, Chief Umeh was reported to have said: “I had to become chairman of APGA not by my wish but to save his mandate. I fought with Professor Maurice Iwu when he wanted to deny Obi participation in the 2010 governorship election for the second term; I fought him in court and overwhelmed him.

“The fact is that Chief Umeh was NOT involved at all in the nomination process that led to the recognition of Peter Obi as the APGA candidate for Anambra election.

APC, PDP, others at war over alleged doctoring of party agent’s…

“There were several conflicting court judgements on the Chairmanship of APGA. Just before the close of nomination for the election Chief Chekwas Okorie was declared the authentic Chairman of the party. APGA had concluded its nomination process and selected Peter Obi as its gubernatorial candidate but INEC could not accept any nomination signed by Chief Victor Umeh because of the legal position.

“I was actually at the Basilica in Yamoussoukro (Ivory Cost) when late President Yar’dua called to inform me that there was a petition by Peter Obi alerting him that it would be unfair to deny APGA the chance to field a candidate in the election.

“The president was shocked when I informed him that I agreed with the petitioner and that it could also create security problem if Anambra people were denied the right to chose their candidate.

“I had to cut short my private visit to Yamoussoukro to attend to the crisis. On my return I contacted Peter Obi through an Anambra state senator who is a mutual friend. I directed the INEC Alternative Dispute Resolution unit to handle the matter.

“The method requires prior neutral assessment or evaluation of the matter and the participation of Chief Umeh was considered counter productive and likely to undermine a win-win resolution.

“The case was successfully resolved and I requested Dim Ikemba Odumegwu Ojukwu to sign the nomination form for Peter Obi. The partially completed forms were sent to Ikemba by hand-courier and he signed and returned the signed document through same person, who is still alive.

“All those who participated in the conflict resolution through the ADR mechanism, including Chief Chekwas Okorie, the INEC head of ADR at the time, the Intelligence Adviser, and the Senator are alive to confirm my statement. Peter Obi was not nominated based on any court action by Chief Umeh. He was NOT even part of the process.

“I have restrained myself from responding to numerous abuses and insults from politicians in order not to be dragged into partisan politics but I have to set the records straight for posterity.

“I had a cordial relationship with Mr. Peter Obi even when he was in court with Dr. Chris Ngige and INEC. He was very respectful and drew a commendable distinction between my person and INEC. I don’t want to comment on Chief Umeh’s statement regarding why he took over the Chairmanship of APGA, history should never be based on re-wired narrative.”

APC, PDP, others at war over alleged doctoring of party agent’s list