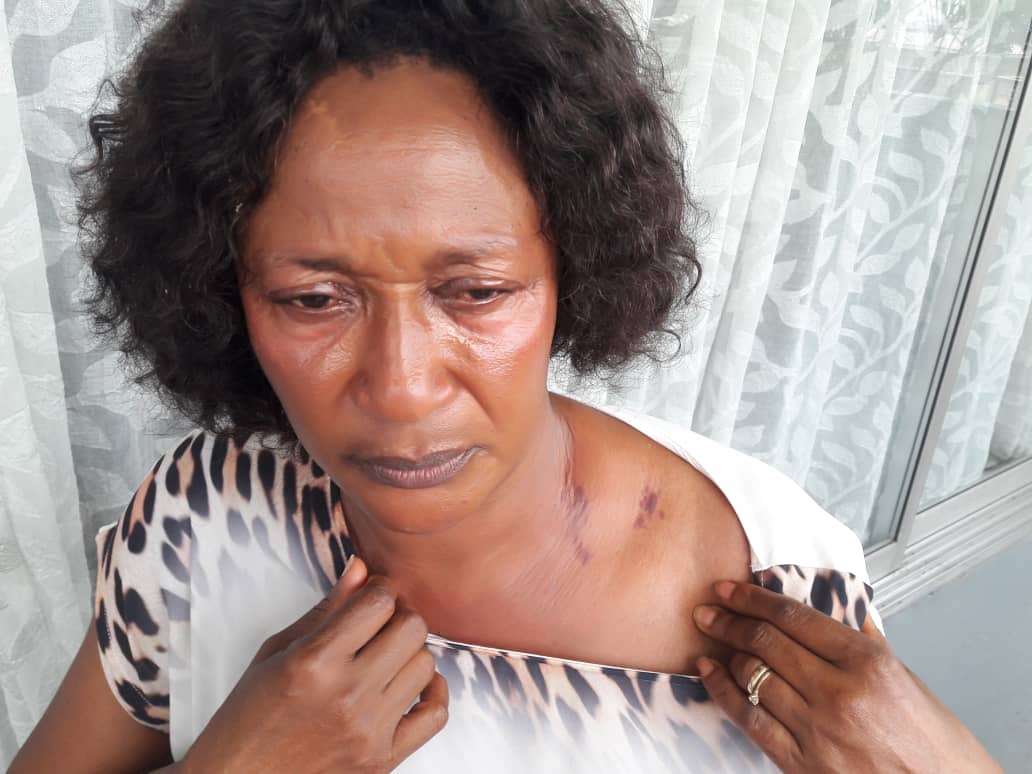 A Lagos-based woman, Marcus Victoria, allegedly assaulted and being threatened by her German neighbour, Mr. Knoop Jens, at an estate in Apapa (name withheld), is appealing to the federal and Lagos State governments for urgent help.

The 44-year-old mother of two alleged that her ordeal started in December 16, 2018, when the German and his mistress from Republic of Benin, Ehehiye Marayah, attacked her over a harmless comment, and stabbed her on her left palm.

The Cross River State-born said although the matter, which was first reported at the Trinity Police Station, and transferred to State Criminal Investigation Department (SCID), is now in court, Jens and Marayah have continued to attack her both verbally and physically whenever their paths crossed.

Victoria said the most recent of the attacks was on June 5, 2020, when Jens, Marayah and their accomplice, yet-to-be identified, ran into her at the estate bar.

She claimed the trio rained insult on her, smashed her phone, physically assaulted and almost strangled her, but for her husband and the security men who came to her rescue.

Victoria said Marayah even told her she was lucky to be alive as her boyfriend only missed stabbing her on the stomach by whisker, saying, “you may not be so lucky next time”.

The distraught woman, who said she now leaves in fear in her own country, alleged that the duo now frequents her house, hiding by her fence to rain insults on her.

In fact, Victoria said Jens and Marayah pose a threat to her life and that of her family.

Narrating her ordeal in the hands of the foreigners, Victoria, who is still recuperating after the alleged attack, said she needed urgent help.

“ I am a Nigerian and married to a German who works with a multinational in Nigeria. We have been married for 15 years and we live at an estate in Apapa, designated for staff of the company.

“My travail started in December 16, 2018, when I and a few neighbours were having a conversation.

“One of us complained about the fact that people contribute money for picnic, and yet, when they get there, they don’t get food to eat.

“I called the attention of Jens’ lover to the matter because the picnic often held at their beach house. She flared up and started ranting.

“Jens who was not too far from the table where we sat, came close and on hearing the matter, became violent.

“He picked a bottle, broke it and was heading towards me, but the people there stopped him, he picked another and he was held and people pleaded with him to be calm and let the matter pass.

“He acted as though all was well and walked to the table where I was sitting to also take a sit.

“But I was shocked when he got to the table, he picked a bottle, broke it and was aiming for me. I wanted to run, but he rushed towards me, wanting to stab me on the abdomen, but I covered my abdomen with my left hand and he stabbed me on my palm.

“The stab wound affected the nerves in that hand and till date the hand is numb, shrinking,  and I have lost usage of the hand. I reported the case at the Trinity Police Station.

“Three months into the investigation of the matter, Jens sent people to me to ask how much I wanted, he never came to say he was sorry for what he had done, so I refused because I wanted justice. I know a Nigerian cannot go to his country and do same.

“He even met me on one occasion and boasted that if I decide to go to court, the case will remain in court for seven years, that I was only wasting my time. Jens also did a petition to the State Anti-Robbery Squad (SARS), Lagos State Police Command, alleging that I was the one that sent a four-man gang to attack him, just to victimise me.

“But fortunately, the case of assault was later transferred to SCID and upon the Directorate of Public Prosecution (DPP) advice, the case was charged to court in August 2019.

“The lockdown occasioned by the Coronavirus pandemic stalled the case. But it was like the lockdown also brought me more trouble, as whenever Jens or his lover set eyes on me, they would start abusing me, and because I know we have a case in court and also did not want more trouble I would pretend I did not hear them and just walk away.

“However, on June 5, I  and my husband went to the staff bar within the state to get a bottle of drink. We met Jens and Marayah there.

“I walked to the fridge to get drinks, while my husband got a space for us. Marayah walked up to me and started another session of insults. I choose not to answer and concentrated on the drinks I came to pick.

“She started using her buttocks to hit my body and she asked her friend to video-record the action. I also chose to video record her too, but was shocked when Jens appeared from nowhere, held my hand and asked Marayah to snatch my phone and smash it on the ground, and immediately she did.

“They had  a male friend in their company, whom Jens ordered to grabbed my neck, he did and almost strangled me.

“Thank God my husband and a few others in the restaurant came to my aid and rescued me. Jens even called out my husband for a fight, which my husband refused to give in.

“The security men ordered her and Jens to leave as they were not staff of the company and do not qualify to use the bar.

“I immediately left for Trinity Police Station to report the assault. Later that day when I had retired home, I was shocked to see Jens and Marayah standing by the fence of my compound, they insulted my husband and I not minding the fact that they were invading our space.

“Marayah kept saying Jens will kill me and I don’t want to die now. Jens also told me to my face that he will kill me this lockdown so that the case we have in court will die.

“He said by the time he kills me, he will know who will give evidence in court. ”

“The Nigerian government should come to my aid. My life is being threatened by this foreigners. I had even gone to make a report to NIS on this matter, and Jens’ lawyer who came with him when he was invited told NIS it was a civil matter being handled by the police.

“I am tired and need urgent help. I am a Nigerian and I see no reason why a foreigner would be making me live in fear in my own land, when I have done nothing wrong to him,” she stated.

Jens was contacted for comments via his mobile phone number. He maintained that he did not want to talk about the matter because he feared whatever he said might be used against him at the police station or in court.

He however said, “ Victoria is a liar, and there is nothing to say about the matter. I did not touch her. She was the one who attacked me, she started this rubbish.

“I don’t know why she is going far like this. It was not me that smashed her phone either.

“We already have a matter in court, and I know anything that I say may be used against me in court or at the police, that will also make the story bigger,” Jens said.