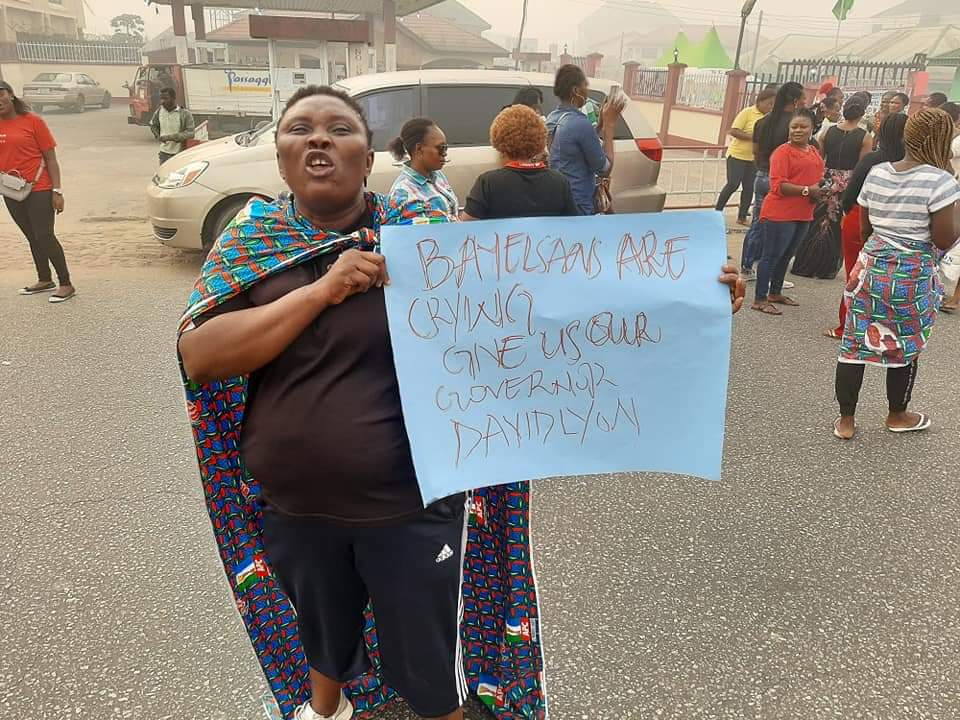 Protests have rocked different parts of Yenagoa, Bayelsa State capital, following the Supreme Court’s judgement that stopped the inauguration of Chief David Lyon as the governor of the state.

Thousands of women took to the streets blocking major roads to protest the judgement insisting that no handover of power would be conducted in the state without Lyon.

The ‘No Lyon, No Governor’ demonstration was spontaneous as people freely joined the protest that had few placards.

Riots commenced in the state on Thursday night after the judgement as youths blocked popular roads in Yenagoa, the state capital.

The youths, who sang in solidarity displaying the flags of the All Progressives Congress (APC), refused to vacate the roads leaving motorists and commuters stranded.

One of the commuters, who spoke in confidence, said she ran into the obstacle created by the rioters describing her experience as terrible.

She said:  “It was a terrible experience when I ran into them. They refused to vacate the major road. There was no vehicular movement of any sort. People were forced to return to their homes”.

It was learnt that the protesters made bonfires to cover the dual carriage ways as they remained there till after midnight.

On Friday morning, the palpable tension that enveloped the capital city forced many people to remain indoors.

Investigations revealed that the Samson Siasia Sports Complex, the venue of the inauguration was deserted.

But another venue was being prepared in front of the Governor’s office in Government House by the Peoples Democratic Party (PDP) in anticipation that its candidate, Senator Douye Diri, would be issued a certificate of return by the Independent National Electoral Commission (INEC).

Bayelsa State Governor, Seriake Dickson, has insisted  that his candidate, Senator Douye Diri, would be inaugurated as the new Governor of the state following the judgement of the Supreme Court.

But the State All Progressives Congress (APC) has warned against inaugurating Diri as the state governor saying he did not meet the constitutionally electoral requirements for inauguration as directed by the court.

Reacting to the judgement of the court in a special valedictory live media chat, Dickson faulted the position of the APC National Chairman  Adams Oshiohmole on the judgement.

He said: “The court has decided and I dont think the national chairman of the APC is competent to seek an appeal over the decisions of the Supreme Court.

“The last time I checked the rules the judgement of the suprmen court is final and that is what we have now. Any other issue is a question of interpretation and opinion. My candidate will be sworn in tomorrow (today).

Dickson, however, called for calm and warned against tendencies that could lead to breakdown of law and order in the state.

He said the judgement was victory for democracy and all Bayelsans across party lines and called on the opposition leaders to rein in their supporters.

He said: “You cant have a state if you dont have peace and stability. But once the matter has been decided one way or the other, as law-abiding people, you  show understanding, rein in your supporters, explain to people and live to fight another day.

“That is what we do as politicians. I will like to congratulate all Bayelsans. We are actually waiting for the court position to be taken for me to invite anybody that win even if it is David Lyon to interact with me. We have programme lined up. We have done everything to ensure smooth transition.

“But now that the supreme court has decided otherwise. I call for everyone to take it in good faith and live to fight another day. No breakdown of law and order. No incitement.

“I believe that processes will be put in place to ensure that people will be carried along as much as possible. Those who have issues I am sure the incoming governor will say a thing or two about that. We have always run an inclusive government.

“And I believe that his own will be no difference. My take is actually to say that all of us have won. Even for those celebrating, is not to spite anybody. We have all we  as a people and all of us should manage this process because the court has decided”.

But the APC in a short media briefing conducted by a member representing Southern Ijaw Federal Constituency in the National Assembly, Preye Oseke, described the judgement as shocking and procured.

He said the APC and the people of Bayelsa totally rejected the judgement and called on the Independent National Electoral Commission (INEC) not to issue certificate of return to Diri.

Oseke argued that even based on the pronouncement of the court, Diri was not qualified to be sworn-in as he failed to meet the constitutionally required geographical spread in the election.

He said: As a people and party, we are rejecting the judgement completely. It is a procured judgement. While we have our respect for our revered justices, we believe that this is not the wish of Bayelsans.

“As a party, we are law abiding. Our properties had been destroyed even in the midst of the judgement. But we are calling on all our party supporters to remain calm while our leaders, stakeholders meet and come up with the next line of action.

“We  believe that the right thing will be done and the the rule of law will be upheld”.

D’ Day for Nnamdi Kanu’s parents burial: Crowd surge as the corpses are being awaited