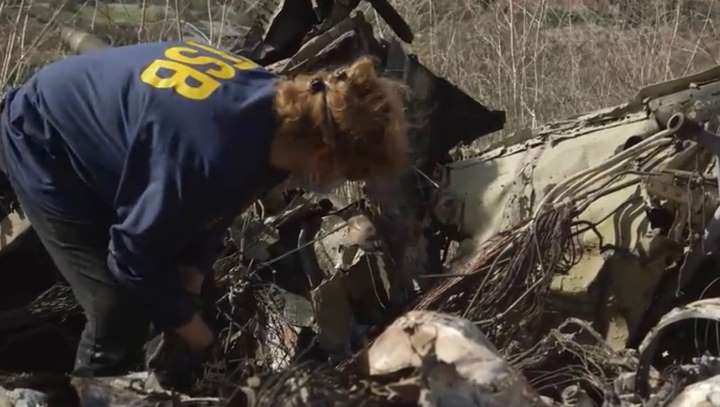 Transportation Safety Board, on Friday are turning to the travellers’ personal electronics for potential answers with no black box recorder aboard the helicopter that crashed on January in Calabasas, killing Kobe Bryant and eight others, investigators with the National.

Investigators hoped the passengers’ cellphones and the pilot’s iPad could help them better understand the chaotic last moments of the flight before the chopper slammed into a hillside in foggy conditions.

Experts said the helicopter was flying low enough that the activities of the electronics were likely captured by cellphone towers.

The pilot of the Sikorsky S-76B, Ara Zobayan, made his last communication with air traffic control as he climbed to 2,300 feet heading toward Camarillo in heavy clouds on January 26.

Investigators are seeking to reconstruct what led him to suddenly bank left and descend rapidly just before the crash.

The NTSB is increasingly using personal electronics to help understand aviation disasters, and collecting the devices has become part of investigative protocol.

According to NTSB member, Jennifer Homendy, shortly after the crash, NTSB immediately swung into action looking for electronic devices, as we always do.

“We were able to recover an iPad and a cellphone. In the days that followed, investigators recovered additional personal devices and determined that the iPad belonged to Zobayan.

The NTSB spokesman Keith Holloway, said though, it could be a while, before ascertaining whether there was recoverable data on the devices.

Investigators will also examine any potential communications from those devices during the flight from John Wayne Airport in Orange County, where the helicopter took off from.

Meanwhile, the group were heading to Bryant’s Mamba Academy in Thousand Oaks for a basketball game.

According to coroner’s reports, when the chopper went down about 40 minutes later, everyone on board died.

The helicopter had neither a cockpit voice recorder nor a flight data recorder, better known as a black box, for the NTSB to analyse. However, Federal Aviation Administration regulations did not require the chopper to have such recorders.

But the pilot did have an app loaded on his iPad that allows a pilot to plan a flight and check on weather, terrain, position and potential hazards in real time from the cockpit.

The ForeFlight app can provide in-flight alerts of changing conditions, and it monitors GPS, speed and other dynamics of the aircraft.

The NTSB, however, said it was unclear whether Zobayan was using the iPad because of the level of destruction during the crash.

A former FAA inspector, Gary Lackey, who for years has inspected choppers at Island Express, the operator of the helicopter that went down, said it was not uncommon to see iPads with ForeFlight mounted for use by pilots.

Thai King reinstates ex-consort after stripping her of all titles…

Veteran aviators, however, said the devices could provide insight into a flight but could also prove to be a distraction.

According to the agency Cellphone records are crucial in determining the cause of a fatal crash of a Bell helicopter in New Mexico in September 2017. The helicopter was flying over open ranch land when it went down.

NTSB determined there was no mechanical failure or malfunction, but the pilot’s cellphone, which was recovered and reviewed, showed he had called a car rental agency during the flight.

However, the car rental clerk said she could tell the pilot was in a helicopter and that he seemed “busy or distracted.’’

“They were talking about a future rental when the phone disconnected mid-sentence,’’ she said.

“Based on available information, the pilot was likely using his cellphone during the low-altitude flight and became distracted, which resulted in the controlled flight into terrain,” NTSB said.

Similarly, the likely cause of the fatal crash of a single-engine Cessna airplane near Watkins, in May, 2014, was revealed by a GoPro camera recovered from the wreckage.

While the crash itself was not captured, the video revealed the pilot and various passengers had been taking selfies with their phones during a night flight, sometimes using a flash.

The NTSB, however, said that the pilot probably became disoriented and “it is likely that the cellphone used during the accident flight distracted the pilot and contributed to the development of spatial disorientation and subsequent lack of control.

In addition to personal electronics, investigators are also likely trying to extract data from the helicopter’s flight management system.

A veteran pilot of Sikorsky helicopters with two decades flying as well as training pilots, Doug Solbrekken, said he suspects the system
would not yield much more than what officials already know from local radar.

“There is still a slim chance that a passenger’s mobile phone or iPad could have been recording at the time of the crash.

“Some pilots also use GoPro-type cameras suction-cupped to the windows, either pointing outside or back into the cockpit or cabin during flight,” he said.

The FAA in 2014 banned airline pilots from using personal electronic devices, citing them as a distraction.

But general aviation pilots are allowed to use devices such as tablets with programs like ForeFlight. With pilots who are approved to fly passengers and cargo, the FAA can authorize operators to use electronic devices that can assist pilots.

The U.S. Department of Transportation in 2014 examined the safety of electronic flight devices and personal electronics used in the cockpit.

However, pilots complained of trouble scrolling and zooming with sometimes incorrect data and said the devices can be a distraction and sometimes lead to misinterpreted or erroneous aircraft performance parameters. (NAN)