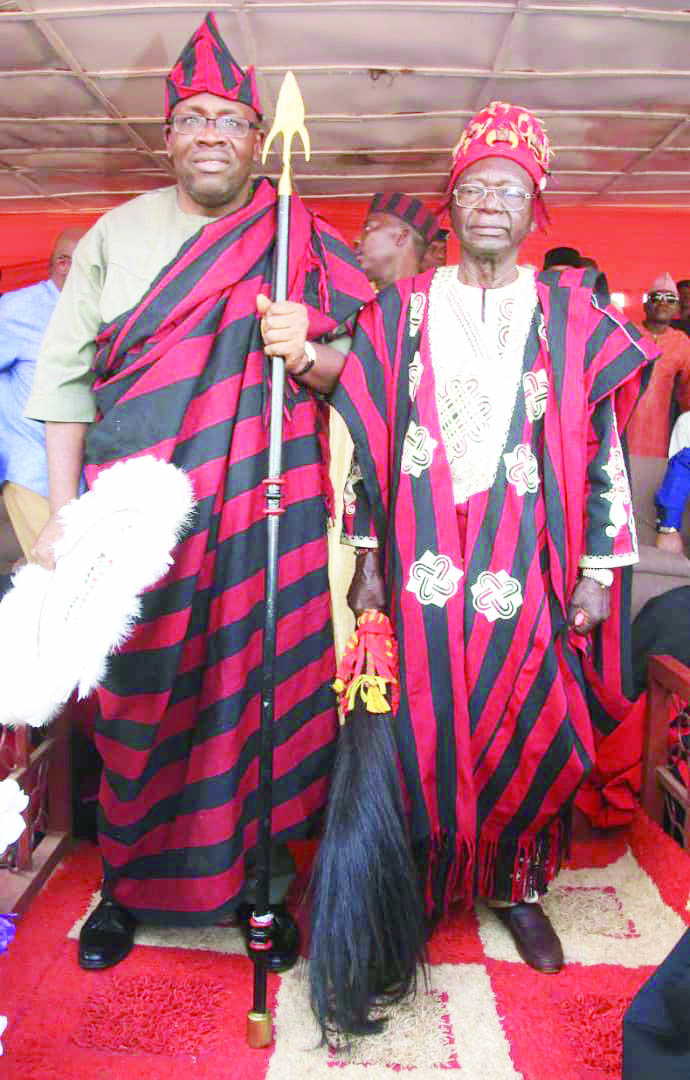 It was a day to remember for Governor Seriake Dickson of Bayelsa State in far away Benue State penultimate weekend. Dickson, popularly called ‘Country Man” bagged the highest title in the Idoma Kingdom, less than a week to his exit from office.

The event, which took place at the Och’Idoma Square, Otukpo, attracted the who is who in the society, including former Senate President, Senator David Mark, Deputy Governor of Benue State, Benson Abounu, member, representing Ado/Okpoku/Oghadibo Federal Constituency at the House of Representatives, Francis Ottah Agbo and other prominent sons from Bayelsa State.

The paramount ruler of the Idoma nation, Och’Idoma, HRH, Agabadu, Dr. Elias Ikoyi Obekpa, said the award of ‘Oy’Ihotu K’ Idoma’, which translates to ‘illustrious son of Idoma Nation’ was given to Governor Dickson, owing to his continued show of love for the Idoma nation.

The award, according to the paramount ruler is in recognition of Governor Dickson’s friendship with Idoma people and his numerous contributions to the empowerment of Benue sons and daughters in Bayelsa State.

He described the Bayelsa State governor as a detribalised Nigerian, who has contributed in no small measure to the development of the country, noting that the title was a token of appreciation from the Idoma nation for his wonderful gestures to it.

Aside from appointing a Benue man and current lawmaker, representing Ado/Okpoku/Oghadibo Federal Constituency at the House of Representatives, Dr. Francis Ottah Agbo, as special adviser on media relations and later, chief press secretary, Governor Dickson also appointed Mr. Steven Ekoja as his special assistant. He also appointed an Idoma man, Innocent Adaji as his chief driver and another Idoma man, Mr. John Adaji as his farm manager, while some of his cooks are of Idoma and Tiv extractions.

He said the governor also appointed a Benue police officer, late Inspector Ameh Ogbeh as his escort commander, among several other engagements.

The paramount ruler said: “Governor Dickson is conferred with one of the highest traditional chieftaincy titles today as a way of cementing the relationship that exists between the Idoma people, the Izon ethnic group and Benue people.

“On behalf of my council and the entire Idoma kingdom, I wish to, genuinely, appreciate your commitment to a peaceful and united Nigeria and in particular, your friendly disposition towards my people, including the Idoma community resident in Bayelsa State.

“In view of the above, and to further strengthen this relationship, I and my council, the Idoma Area Traditional Council, at our sitting decided to adopt you as an illustrious Idoma son by conferring one of the highest chieftaincy titles in the kingdom on you.

“We intend the ceremony to coincide with our annual pan Idoma festival, the ‘Eje Aje K’Idoma’.”

Speakers, who took turns to speak at the event, eulogized Governor Dickson, describing him as an astute politician, who has carved a niche for himself.

Senator Mark commended the governor for his contribution to the development of Bayelsa State, especially in the area of infrastructure.

“The honour is an honour well deserved, considering his contribution to the Idoma Nation and Benue State in general,” Mark said.

Chief Abounu, the Benue State deputy governor said: “The honour done to the Bayelsa State governor by the Idoma Kingdom reflects the true Nigerian man that he is,” adding that it was to reciprocate his good gesture to the people of Benue State.

He thanked the Idoma Kingdom for the honour even as he asked the God to continue to preserve and protect the Och’Idoma and for the survival of the entire Idoma nation.

Governor Dickson, in his speech at the occasion, was full of gratitude to the Idoma nation over the show of love by the kingdom.

Dickson said all through his life, he thrived to contribute to the society and expressed happiness that his efforts were being noticed and appreciated even beyond his home state.

He charged the Idoma people to at all time, rally round their leaders both political and traditional and stressed that their contribution to the development of Nigeria was enormous.

The governor urged them to continue to keep faith in the country even in the midst of daunting challenges occasioned by a near collapse in the security architecture and expressed hope that better days were surly inching close.

The event, which threw Otukpo, the Traditional Headquarters of the Idoma nation agog, was climaxed by the decoration of Governor Dickson by the Idoma paramount ruler in Idoma chieftaincy attires, thus ushering his initiation as a honourary member of the Idoma Traditional Council.

Coronavirus’ll be gone by April when weather gets warmer – Trump