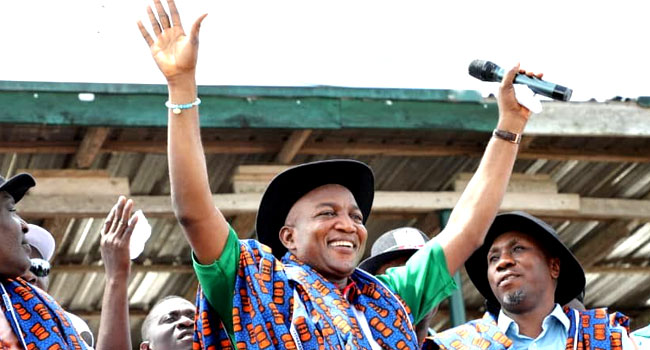 The formal inauguration of Chief David Lyon, as the 8th governor of Bayelsa State takes place in Yenagoa, the state capital, on Friday.

The swearing-in would mark the end of the Seriake Dickson-led Restoration Government and for the first time witnessed a change of government, involving two different political parties in this 4th Republic.

Now, the expected changeover would set the stage for governance by the new administration to be led by the All Progressives Congress, APC. The campaign rhetoric is over and Governor Lyon would be called upon by the majesty of democratic pronouncement of the people via the November 16 election to walk his talk.

Going by modern practices, the first 100 days will count so much for the governor as the people will be looking forward to the actualization of their high expectations from Lyon to change the narrative of their socio-economic wellbeing and as he has promised during the electioneering campaigns.

The traditional 100 days should give a semblance of sure leadership, commitment and competence, as the people begin to feel the impact of government. It must be convincing thereby entrenching the belief of the people that Lyon means business.

A major issue in the campaign was the notion that the outgoing administration did not do enough within available resources to empower the people. Lyon, with his perceived personal empathy, liberal and humanitarian relationship with the people through various empowerment programmes as carried out by his foundation, gave the popular impression that he would provide a better alternative to the Restoration administration by cushioning the pangs of prevailing economic situation in the state.

It is noted that Bayelsa State is a civil service state with little economic activities and entrepreneurship, a situation which makes the state government the major source of economic support to the people.

Before the Restoration government, the people used to get largesse from the government, a direct splashing of cash to satisfy a diverse group of individuals and interest groups. But the Restoration administration stopped this practice which it believed was not only illogical but also unsustainable in the proper development of the state. Instead, money was channeled into human capital development, diverse socio-economic projects, including infrastructure and signposted by what the government regarded as the “revolution in education”.

While this may be tenable, analysts are of the opinion that governments everywhere exist to cater for the basic needs of the people. Then it boils down to prioritization of what should constitute the core of human needs in relation to government’s evaluation and judgement.

To this extent, some opinion leaders in the state believe the welfare of the people should be uppermost in the priorities of governments. They believe this concern should be the point of departure between the Dickson era and that of Lyon, who is said to be ready to make material empowerment a core of his administration policy.

This is more so in Bayelsa like most other states where poverty is prevalent amidst mass unemployment.  Here, the youths are most vulnerable many of who are not well educated to be absolvable even when there are jobs. But the reality is that jobs are not even available. The private sector is not active and the civil service can only take very limited hands.

Bayelsa is an agrarian society where farming and fishing are the major occupations of the people. Unfortunately, but both are not too attractive to the core of the unemployed youths. The epileptic power supply in the state has only worsened every imaginable enterprise that could ever make a difference in the economic lives of the people. Yet, crime and criminality constitute a raging concern.

These are the issues before the new governor who has, however, promised to recalibrate the socio-economic formations in the state to get going once again. Lyon has avowed a new dawn where his political leadership and will power will harness the state resources and rejig a fresh template that can actually turn things around in the state.

And many believe he could deliver on his promises to the people, a leap of faith which, in the first instance, heralded such an incredible support for him during the November 16 governorship election.

In this regard, Governor Lyon must hit the ground running to deliver on his promises bothering on policies and programmes that could really empower the people, devoting due attention to fixing electricity supply, provision of portable water, roads construction and containing the scourge of crime in the state. Of course, without security there can be no meaningful development. These are the starting points to convince the people that he’s walking his talk and as rendered during the campaigns.

With noticeable marks in these areas within the first 100 days, particularly on the question of empowerment, then he’s up to doing greater things in the long run, all thing being equal. This is how the populace will begin to evaluate his stewardship.

However, whether the high expectations of the people could be met in the short run stretching even beyond the first 100 days is a different matter altogether. But optimism is very high that Governor Lyon will change the narrative of the socio-economic fabric in Bayelsa State to the admiration of the people.

Speaking on the governor’s aspirations amidst such high expectations, the Chairman of the APC Inauguration Committee, Chief Samuel Ogbuku, allayed any fears on performance of the Lyon administration, saying the new government will approach governance differently but sure to make the desired impact.

He said the personality of the new governor will compel people to adopt new political culture and values, especially in the areas of deploying and utilizing public resources.

Ogbuku went philosophical to buttress his conviction on Lyon’s personality as being fundamental in shaping the new government to emphasize service rather than material acquisition as we know it in our political environment to the detriment of the larger society, quoting Aristotle on the tenets of leadership and why successful people will do better in leadership capacity.

He said: “Aristotle said leadership should be for aristocrats because they have values different from that of the poor. The poor man has poverty mentality and such mentality has eaten deep into him. So he is greedy in anything he is doing with consequences on the affairs of state. But the rich has different mentality that transcends corrupt tendencies because he’s already rich.”

This scenario, he said, would be put into governance by the new governor, who Ogbuaku said, would not be greedy towards material acquisition and thereby helping in devoting resources to the development of the state and by so doing his lieutenants have no choice but to follow suit.

Similarly, APC chieftain and former media advisor to the new governor, Chief Gift Ebiki, posited that Lyon would make a difference in governance because of his character, integrity and his pro-poor inclination.

According to him, the governor had shown over time that he is a leader who is compassionate and dedicated to the cause of humanity, adding that his personal antecedents in private life would be translated into governance by making the issues affecting the people of the state his priority.

“There is no question whether he would perform or not. He has demonstrated his convictions on all the major issues affecting the people as an individual in private life and we would soon see how government policies and programmes could have significant effect on the lives of the people, especially the poor masses.

“Well, in the past seven years, he has a scholarship foundation that has been able to train about 75 people. Most of them have graduated from secondary school. I know two of them are in Turkey, three in Canada, two in U.K, two in Greece doing professional courses in law, engineering and medicine. This has been sustained for the past seven years. So he’s an epitome of peace, epitome of generosity, epitome of philanthropy, so the Bayelsa people were looking for an opportunity for such person to come and govern them.

“On policies and programmes, economic empowerment is key, so also is infrastructure and security. All other issues like education and health will get due attention. Well, on the issue of insecurity, he has told every Bayelsan that the first thing he wants to tackle with due consultation with Bayelsans, with stakeholders, traditional rulers, students and unionists is to tackle insecurity which he has been trained for. It’s not a new thing in his life. He’s providing security for the oil majors, so it’s not new. He’s an encyclopedia of security because without him, most of the International Oil Companies (IOCs) would have left the Niger Delta.

So, he would bring that to bear in the state and that’s his priority. This is very important because where there’s no security, there is no development. If the state is secure, then other things will follow and that’s his first priority; to provide security for people to sleep well and live peacefully in Bayelsa.

“So, all he needs is the cooperation of our people and indeed the political elite and the stakeholders to support him and the new administration,” he said.

A student of the state-owned Niger Delta University (NDU), Moses Derifagha, was also of the view that the new governor would likely translate his personal humanitarian proclivity into governance through “people-centred policies.”

In a chat with The Nigerian Xpress, Moses said Lyon’s popularity was informed by such humanitarian tendencies which he averred was instrumental to his victory and as such he would work hard to continue to earn the support of the people.

“Anything short of that would be disappointing because the people of the state believe he is coming to make life better for them. Many actually voted for him not on the basis of party affiliation but on his record of philanthropy. So to whom much is given much is expected through people-centre policies,” he said.

Yet amidst such high expectations, a development expert, Dr. Akpomofa Aladenyefa, has cautioned the new governor and the leadership of the APC in the state to be wary of any early friction in government. This, he said, would be dangerous for the survival of the government and its future aspirations.

In an interview, Aladenyefa said such friction could happen as a result of struggle for power and positions in the new government as he called for mutual relationship between Lyon and APC leader in the state, former governor and Minister of State for Petroleum Resources, Chief Timipre Sylva and other leaders of substance in the party.

He said: “One thing the new governor must watch is the possibility of friction, especially between him and APC leader, Timipre Sylva. Both leaders need to work together harmoniously in running the government.

“Although the buck stops at the governor’s table, Lyon should endeavour to carry everybody along in the new government.

“They have to be careful about the surreptitious activities of the “professional fifth columnists” that are always lurking in every government. And as we look around across the states, the usual rift between godfathers and the governors leading to such bad blood should be avoided at all cost.”

He also cautioned that the high expectations of the people from Lyon should be tempered with reality of the economic situation in the state and in the nation at large, stating that “Lyon is not a magician and can only work within the financial limitations of the state.”

As Chief David Lyon resumes office, all eyes would be on him, not only in fulfilling his promises but also serving as a force for good by his inspiring leadership.

Of course, the honeymoon won’t be long. The people have invested so much hope in him and now this is the time to pay back through innovative approaches to governance, courage, integrity and clear focus.