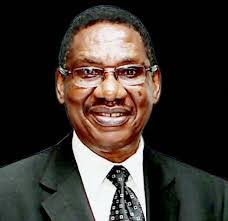 Hajia Zainab Mohammed, National Secretary of the organisation made the call in a statement on Thursday in Abuja.

Mohammed said Sagay’s removal would be the only option to stop him from inflicting further damages to the president Buhari’s administration.

Mohammed also said the PACAC chairman should also be probed for his alleged anti-government activities.

“This has become necessary to stop him from further embarrassing the government with his negative utterances in the past five years.

“You cannot constitute yourself into an internal opposition and remain with the same government you are meant to serve.

“ Constructive opinions or observations should be conveyed to necessary agency of the administration in a civilised manner rather than consistently washing dirty linens in the public.

“The Coalition of 24 Civil Society Organisations (C24) views Sagay’s antecedence as antithesis to the ideals of the president. This is a deliberate act to run down the government’’, Mohammed said.

The national secretary of the C24 said Sagay had allegedly plotted to create disunity amongst the various anti-corruption and security agencies.

She said it was unthinkable for Sagay to canvass the removal of EFCC and ICPC from the control and supervision of the Attorney General of the Federation.

Mohammed explained that such campaign was counterproductive in the administration’s anti-graft war.

She said Sagay’s under-current maneuvers were meant to embarrass the administration, adding that no individual should be allowed to sow seed of disunity among anti-graft agencies and their supervising organs of the government.

“As chairman of PACAC, there is nothing wrong with innovative ideas if he considers them necessary, but that he should have done without necessarily going public.

“The AGF has a good working relationship with all the security agencies under his jurisdiction.

“The EFCC and the ICPC have not complained of any marginalisation by the Attorney General.

“If there are any grey areas, it should be an internal matter rather than castigating the administration in the public.

“This is unacceptable and must be addressed by Mr. President. Any employees of the government found inconsistent with its policies should be weeded out immediately.

“This administration is putting in so much effort through the office of the Attorney General and should not be rubbished by activities of persons with hidden agenda’’, Mohammed.

The national secretary further explained that Sagay had expressed unhappiness with alleged frequent attempts by the AGF, Abubakar Malami, SAN, to stiffen the freedom of the anti-graft bodies under his supervision.

She said Sagay had specifically canvassed support for the reappointment of Mr Ibrahim Magu as the EFCC chairman.

“Our investigation reveals that Sagay’s son may currently be under the employment of the EFCC. So his actions may clearly be for selfish interest.

“Using privileged positions to get favour is an act of corruption and insubordination to President Buhari and the Nigerian public.

“Moreover, those who crafted the act establishing the EFCC, ICPC and other similar agencies were aware that without checks on the activities of such agencies could turn them into bullies.

“The AGF is also not an Island to himself as he confers with the Presidency for his actions.

“It was also surprising that Sagay, as an anti-corruption champion could express worries that the office of the AGF is desirous of creating an agency that would keep custody of all recovered assets’’, she said.

Mohammed said: “to our understanding the suggestion became necessary for transparency and accountability on the management of recovered assets’’.

“ Nigerians are asking questions on the whereabouts of our recovered loots by the government and the answer can best come from the establishment of a central pool for the custody of such assets for transparency and accountability.

“There is nothing wrong for such proposed agency to also investigate, arrest and prosecute offenders.

“After all, we have the Nigeria Police before the EFCC, ICPC, NFIU and others were created. The more we have such agencies the more we fight crime better in the country’’, Mohammed said.

On the Federal Government’s ban on the establishment of “Operation Amotekun’’ by the South West governors, Mohammed said Sagay’s open call for the governors to revolt against ban was shocking.

“The pronouncement of the Attorney General of the Federation that the outfit is illegal is the position of the government Sagay serves.

“While we are not justifying the correctness or otherwise of such pronouncement by the government, it is odd by all standard for an appointee of same government to kick against such policy statement so brazenly.

“He has other options to explore rather than this level of embarrassment.

“We are therefore calling Mr President to as a matter of urgency relieve Prof. Itse Sagay of his appointment and an appropriate committee be set up to probe his activities so far against the government’’, she said.

Mohammed said: “we commend the Attorney General, Abubakar Malami (SAN) for his competence and capacity in discharging his duties so far’’.

NAN reports that several attempts made to get Sagay’s opinion on the matter did not yield the required outcome. (NAN)