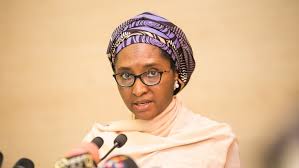 Mrs Zainab Ahmed, the Minister of Finance, Budget and National Planning says arrears of consequential adjustment for the new minimum wage will be paid to workers in December.

Ahmed gave the assurance while answering questions from stakeholders during the highlights and breakdown of the approved 2020 budget in Abuja on Thursday.

She said the Federal Government had made adequate provision to pay the arrears of the consequential adjustments of the approved new minimum wage for federal civil servants.

“I want to confirm to you that we have made adequate provision in the 2020 budget on the issue of minimum wage.

“And we are also planning to pay the arrears of the consequential adjustments in December, ” she added.

Giving a breakdown of the 2020 budget, the minister said that the sum of N4.49 trillion would be expended on recurrent expenditure.

According to her, the sum of N2.465 trillion has been earmarked for capital expenditure,  while N2.453 trillion is projected for debt servicing..

The minister put the projected revenue from other revenue sources at N3.97 trillion, adding that a total of N8.42 trillion revenue was expected to be generated in the N10.594 trillion budget.