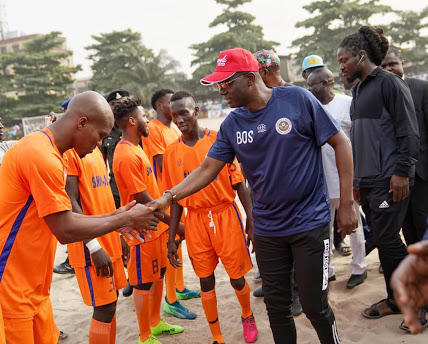 As action continues in the second round of matches at  the ongoing annual Sanwo-Olu  Ajegunle Mock Nations Cup  at the Navy Ground, Ajegunle, Lagos,  organisers of the oldest grassroots football tournament in the country said they are committed to having a quality tournament, which everybody would be proud of, even as they commended the Lagos State Governor, Babajide Sanwo- Olu, for his assistance in ensuring that the competition held.

Secretary of the Local Organising Committee of the tournament, Sikiru Achimi said beyond organizing a successful championship, they are poised to produce more Ifeanyi Udeze, Gabriel Okokosi, Monday Odiaka, Ben Ejiogu, Awala Jumbo, Odion Jude Ighalo and late James Eniagwana who are all products of the tournament.

“We want to assure our numerous fans that we’re going  to organise a  successful championship which will help in producing more quality players in future for the national teams as has been the tradition of the competition.

“It’s also important that we appreciate the Governor of Lagosp State, Babajide Sanwo-Olu for his moral and financial support towards the holding of the competition. The Governor has been of immense help to us and we must appreciate him.