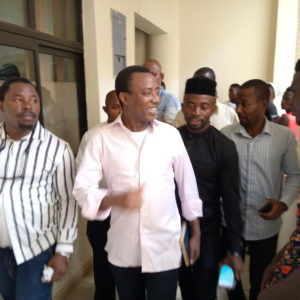 Detained convener of RevolutionNow Movement, Omoyele Sowore, and his co-defendant, Olawale Bakare (aka Mandate), have dragged the Director General of the Department of State Services (DSS), Yusuf Bichi and the Attorney General of the Federation and Minister of Justice, Abubakar Malami SAN, before an Abuja Federal High Court over their continued detention.

Sowore and Bakare in the lawsuit alleged gross violation of their constitutionally-guaranteed fundamental rights and are seeking damages of N500 million each Sowore’s suit marked FHC/ABJ /C51409/2019, and supported by a 21-paragraph affidavit deposed to by Abubakar Marshall and accompanied by a written address, Saharareporters reports.

According to the suit: “A declaration that the detention of the applicant from November 7, 2019 till date in violation of the order for his release made on November 6, 2019 is illegal as it violates his fundamental right to liberty guaranteed by Section 35 of the constitution of the Federal Republic of Nigeria 1999 (as amended) and Article 6 of African Charter on Human and Peoples’ Rights (Ratification and Enforcement Act (CAP A10) Laws of the Federation of Nigeria 2004.

“An order of this court compelling the respondents to pay to the applicant the sum of N500,000, 000, 00 ( Five hundred million naira) as general and aggravated damages for the illegal violation of the applicant’s fundamental right to life, dignity of his person, fair hearing, health, freedom of movement and freedom of association. “An order of perpetual injunction restraining the respondents from further violating the applicant’s fundamental rights in any manner whatsoever and however without lawful justification.”

Sowore was arrested in Lagos on August 3, 2019, for calling for a revolution in Nigeria. A Federal High Court in Abuja had recently ordered the release of Sowore alongside Olawale Adebayo.

The DSS was yet to comply with the order and claimed that no surety had come to take Sowore on bail.

Few weeks ago, a group of protesters led by Deji Adeyanju alleged that they were given N1 million to stop the protest demanding for Sowore’s release.

The DSS, however, said it will release Sowore if his sureties come forward for documentation.

PDP BoT sets up c’ittee over members’ concerns in Edo, Kano, Lagos, others