Without fingers, Taiwo Sultan thrives in the beauty business 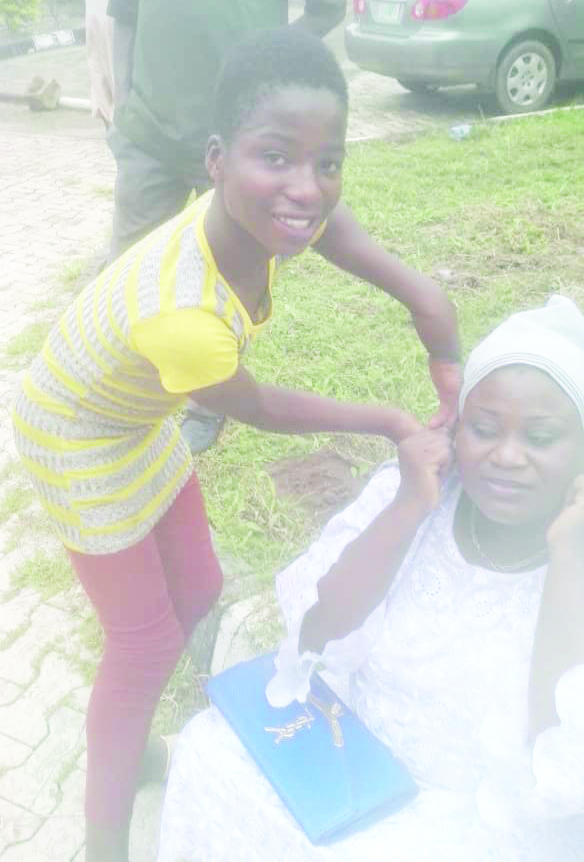 The fashion or beauty vocation is one that depends almost solely on the use of hands. Of course, that is what people see or believe as the norm. That is, perhaps, because they have not been opportune to come across Taiwo Sultan, a beauty expert that has no hands, virtually. Born over two decades ago with a congenital defect that obstructed her two hands from growing normally with five fingers on each, Taiwo Sultan, unlike many in her position, would not give up on living a meaningful life. Instead of taking to the streets, begging for alms, she is currently making cool money by beautifying her fellow women, who are blessed with two well developed hands, writes YEMISI OLUSINA

Last week, at the swearing in ceremony of some officials in Osogbo, the capital city of Osun State, held at  Abeere area of the town, Taiwo Sultan hogged most of the guests’ attention. Reason? She was one of the artisans, rushing to make brisk business out of the female guests, who were yet to tie their headgear (gele) and touch their faces up with some makeup.

A closer look at this lady, her little frame projected her as a small girl, which contrasted sharply with her voice. It sounded deeper and more striking like a grown up or mature woman. “ Mummy come.and tie your gele, I will do it well no matter the style you want. It will go for a cheap price …. You will like it. Come, let me do it for you,” Taiwo kept marketing her vocation.

But convincing as her patronage was, as soon as some of the customers drew nearer to her, they were taken aback. “ Waoh! how on earth would she do all that she claimed she could do with this  little time we have left?” one of her willing customers wondered aloud.

Before you blame her, Taiwo, who paraded herself as a beautician, has two deformed hands. Besides the fact that her two hands are not normal ones, her two palms, which are  equally not physically normal, have only three fingers that appeared like they were merely fixed and not really grown.

Strangely, Taiwo appeared accustomed and comfortable in her skin and shape. Smart and not in the least bothered about the looks on the faces of people around her, she went to display her strength on the customer, who, at that period, made herself available. And within few minutes, Taiwo was already done with fixing the headgear, which actually had taken her contemporaries in the same task, at the same environment, longer time.

Within ten minutes, whether out of sympathy or because of her smartness, a crowd of people soon gathered around her to either attend to their “gele” or have their faces made up.

Narrating her story to The Nigerian Xpress, the young woman said she was born this way and had lived her life with her predicament till the moment. “I grew to know myself like this. So, it is not anything new for me to do everything I need to do with my hands and by myself. I can wash my clothes, plates, do all the cleaning, sweep and cook. There is nothing other people do that I cannot do,” she said.

At the early stage, however, Taiwo, who had it tough growing up because of her physical challenge said she was not happy when she saw that her hands were different from that of other children.

“At first, I felt bad; that was when I was growing up. At home, I saw that I was the only child that had this challenge. Other children had everything normal, I mean, my siblings had every of their body parts grown normally but I do not. I was always unhappy because some children ran away from me. I hardly had friends to play with. Some would not even want to eat, sit where I was sitting and this really made me feel bad,” recalled Taiwo.

Her supportive family, nevertheless, boosted her positive outlook to life. Apart from ensuring that she got basic education, they ensured that she leveraged her challenge to live a quality life. “I thank God for the kind of family I come from. They would not want me unhappy at any given time. My mother was always encouraging me to see life in a better light. They always made me feel loved and made me know that I am not a mistake and should not think God has made any mistake by creating me this way,” she pointed.

Having trained with different bodies of handicapped institutions, Taiwo told The Nigerian Xpress that she is set to take on the world with her vocation. Her words: “I have been trained never to be dependent on people just because of my physical challenge and that is why I have gone to learn makeup artistry. I can tie women’s headgear in various modern styles. I am a beautician and I plan to grow more in this to be able to help other physically-challenged people, who cannot help themselves.”

On why she is not on the streets begging for alms like other handicapped, she said that she would not do anything of such because of her belief that there is dignity in labour. “I went to learn this vocation because I don’t want to be begging for alms. Since I am blessed to use whatever is left of my hands, I do not have to be a burden on anyone. All I have to do and that I have been doing is to convince my patrons of my ability so that they will continue to patronise me at all times,” she said.

One of her customers, who simply wanted to be identified as Mummy Hawa, told The Nigerian Xpress that Taiwo is effective. Mummy Hawa, who is impressed by Taiwo’ s efforts, said: “I am surprised but at the same time excited at the efficiency of this lady. She does not only know her way around the job, she is equally smart. For me, if you are good on a job but you are slow, you will get a low mark. But if you are smart and good, I will rate you well grounded. Taiwo is well grounded in her trade and honestly, I am proud of her. There are so many physically challenged people like her that are not bothered about how to be self-dependent and contribute their quota to the nation’s development. So, I commend her efforts.”

READ ALSO:http://You don’t need to clean your ears, the organ is self-sufficient

Delighted about the fact that she could fend for herself and even others in the family, Taiwo appealed to Nigerians that rather than stigmatising the disabled, they should patronise people in her condition. “I am happy that like other people, I can pick my bills and even assist others in my own little way. But my appeal to people generally is that they should stop stigmatising people like us. Nobody wants to be called abnormal least of all treated like one. I have had people who will never allow me  get close to them let alone touch them because of my disability. At times like that, I feel bad but I just console myself with those who still patronise me. We are not lepers and not evil. So, they should see us as normal and help us by patronising us. If we do not now do our job well, they may then decide to stop patronising us,” she said.

Taiwo’s dream is to own a beauty spa in the future. She advised people living with disability to endeavour to empower themselves in one vocation or another to make them self-sufficient instead of being at the mercy of people while begging for alms.