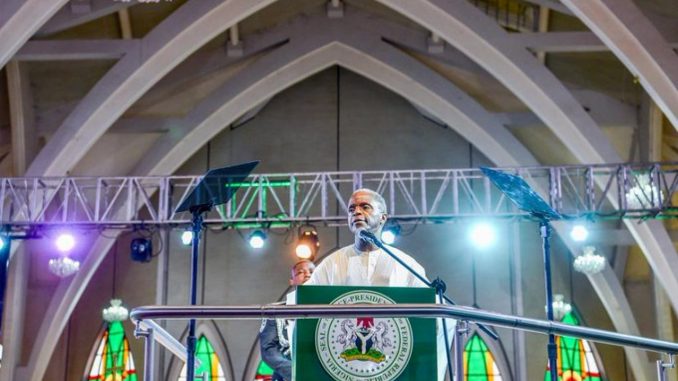 Vice President Yemi Osinbajo on Tuesday at a dinner organised in commemoration of Nigeria’s 59th Independence Anniversary at the State House Banquet Hall, Abuja, thrilled the guests with visual descriptions of attributes that make Nigerians outstanding.

Osinbajo, who spoke on a lighter note, said that one of the distinct attributes of the Nigerian person was the `Nigerian Swag.’

He described `Nigerian swag’ as that uniquely confident way that made Nigerians to stand out everywhere and in everything they did.

Osinbajo, who got the guests laughing and clapping intermittently, cited the sport called Bobsled and presented a power point video of Nigerians girls dancing at the Winter Olympics.

“They thought only white people could do this because it is a winter sport; if you don’t have winter and snow in your country you can’t be a bobsled champion.

“Well, so they thought until the Nigerians came to the Winter Olympics in Pyeong Chang South Korea, three Nigerian girls.

“ Seun Adigun, Ngozi onwumere and Akuoma Omeoga the first Africans in Bobsled at the Winter Olympics.

“They raced into history in style and they ended it with dance.

“How else would you know that they are Nigerians.’’

Osinbajo recalled that when Nike released the design of Nigeria’s jersey called Naija in Feb. 2018, three million people pre-ordered the Jersey for 90 dollar a piece on line.

He said that eventually thousands of people lined up to buy  the jersey and  it sold out in the  stores within hours.

“The jersey was lit; so lit that we won the first prize for the best dressed team, Peru came second and Belgium came third.’’

The vice president listed the quality and prowess of Nigerian boxer, Anthony Joshua, Nigerian wedding, dance and language as some other aspects of Nigerian uniqueness.

“And then there is Anthony Joshua, as far as we are concerned the best boxer in the world not only is he a heavy hitter– he could also pass for a model;  so much Swag.

“How about the Nigerian wedding, it has become the toast of the world, among other things, we are teaching the world that every wedding deserves a hashtag.

“Our contemporary dances have so much swag from skelewu to sekem to shakiti bobo, sakusaku  and the most recent, Zanku, I am sure you all know how to  gbe se ..gbe se .to gbe body e.

Osinbajo also listed one of the richest men in Africa, Aliko Dangote, President Muhammadu Buhari, former President Olusegun Obassanjo a among those who carry Nigerian swag with their dance steps.

According to him, when it comes to fashion, Nigerians are the  masters  of style.

“From the geles, and look at what Iya rainbow is wearing, and of course the famous Madam Kofo’s gele.

“So Nigerian designers are making waves internationally with the infusion of Ankara in their collections.

“And the likes of Lisa Folawiyo,  Mackie O, Andrew Iyamah, Kenneth Ize, Mowa Ogunlesi, have been featured in Vogue and other international fashion magazines and events such as the New York fashion week.

He also displayed Buhari featuring with his `trade mark black  kaftan’  describing him as  the number one man with the swag.

Earlier, in his remark, Secretary to the Government of the Federation, Boss Mustapha, thanked those who contributed directly or indirectly toward the success of the 59th Independence celebration.

He said that the administration was determined to build on the foundation for change laid in the last four years.

Fans excited as trailer for ‘Living in Bondage’ remake drops