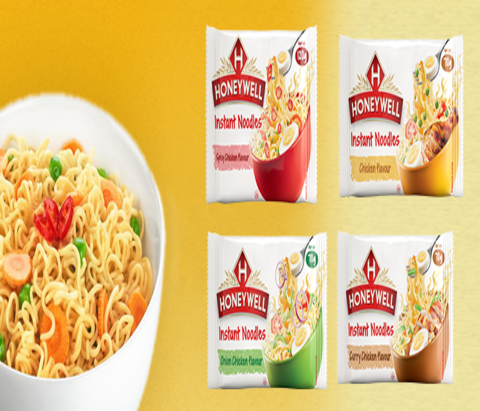 0 6
Share
Honeywell Noodles from the stable of Honeywell Flour Mills Plc has taken its Corporate Social Responsibility (CSR) to the ongoing 5th National Youth Games (NYG) in Ilorin by feeding athletes free cooked noodles.
The News Agency of Nigeria (NAN) reports that the athletes were seen on a long queue to receive the noodles cooked and served with eggs and water.
Oluwafemi Okunnuwa, Brand Activation Officer, Honeywell Flour Mills Plc., told NAN that the gesture was Honeywell’s little way of giving back to the society.
“We are here to support this event and be part of those that will make it be a huge success, that is why we came all the way from Lagos.
“We are giving back to the community as a service to humanity which made us to come since the day events started till the day it will end.
“On the first day which was Tuesday, we gave food to over 1,000 athletes and on Wednesday, we had more people as the crowd keeps increasing.
READ ALSO: Gov. Zulum swears in 3 new commissioners
“But, we are happy to be putting smiles on the faces of these children,” Okunnuwa said.
He said another purpose of the gesture was to bring the product to the consciousness of the consumers.
Related Posts

“’We are bringing our brands to life by trying to promote it.
“It is just a way of bringing to the consciousness of the people what they are not aware of,” the brand activation officer said.
Some of the athletes told NAN that this singular act would make them switch patronage to Honeywell Noodles.
Favour Osita said she was impressed and surprised that a company could feed thousands of people for free as a social responsibility.
“It is a good one from Honeywell Noodles because it is not all companies that can do this.
“So, I am happy that we are getting this kind of food freely which is not from the organisers of this event,” she said.
According to Tony Bello, Honeywell has done so well for us and we are grateful to them for having the youth in mind.
“From now on, I will start patronising Honeywell noodles,” he said.
NAN reports that the Games which started on Sept. 7 will end on Sept. 17 is featuring over 4,000 athletes drawn from 30 states, including the FCT. (NAN)