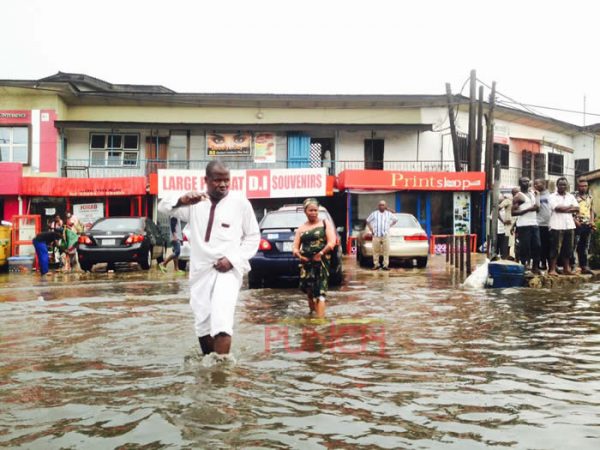 Ahead of Wednesday’s stakeholders’ constituency meetings across Lagos State, some residents of Ikeja area have urged lawmakers representing them to provide drainage systems and roads in the community.
The stakeholders’ constituency meetings usually convened by the Lagos State House of Assembly (LAHA) once in a year is always an opportunity for lawmakers and their constituents to share information about happenings within their constituencies.
Mr Kola Adeyemi, Chairman, Bamishile Community Development Association, Ikeja, said that the drainage systems in Ikeja area needed to be expanded.

READ ALSO:Jubilations, as Saraki’s ex-aide emerges Olupenmen-elect in Ondo
“The drains in Ikeja need to be worked upon because whenever there is a downpour, the whole area becomes flooded.
“This is not because they are dirty but they need to be expanded to accommodate the quantum of water that passes through.
“It is sad that in this age, we are still lagging behind in terms of some basic amenities in this state.
“We are appealing to them to provide long lasting solutions to that so that they will be living up to the promises made to their constituents during electioneering,” he said.
Also, Mr Tunde Adenugba, the owner of a supermarket in Ikeja, said that the people in the area were disappointed with the deplorable state of the roads.
“Ikeja is the capital of Lagos State and the roads are in a bad state and this is baffling to say the least.
“There are several potholes at different spots and this should not have been the case because these are some of the basic things that we expect our lawmakers to do.
“The lawmaker representing us should be able to speak and act on our behalf so that issues like this don’t happen at all.
“Lagos is supposed to be a mega city; so little problems like bad roads shouldn’t be in the conversation,” he said.
Also, Mr Ayobami Badejo, the owner of Sips and Slur Lounge, said he expected the lawmakers to reduce the activities of touts in Ikeja streets

READ ALSO:Ronaldo scores four times as Portugal rout Lithuania 5-1
“Some sort of law enforcement agency should be created to eradicate the activities of touts, especially, at the major bus stops in Ikeja and Ogba areas.
“The lawmakers should wade into this matter and take appropriate actions,” he said.
In his contributions, Mr Moyo Adekambi, a staffer of one of the new generation banks, said that the roads should be expanded to reduce traffic in the area.
“The traffic in the city is terrible because the roads cannot accommodate the volume of vehicles that plies the roads.
“We want our lawmakers to address this traffic problem in the state,” Adekambi said. (NAN)