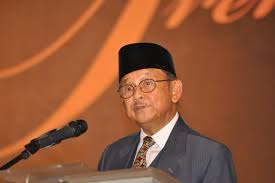 Former Indonesian president Bacharuddin Jusuf Habibie died on Wednesday after being treated in a Jakarta army hospital for a heart ailment.

Habibie  was 83 at the time of death.

“I on behalf of the people of Indonesia and the government would like to express my deep sorrow for the passing of Professor BJ Habibie.

“Mr Habibie was a world-class scientist, the father of Indonesian technological advancement and the third president of Indonesia,” President Joko Widodo told reporters.

Last year, Habibie was admitted to the Starnberg hospital near Munich and underwent treatment for a leaky heart valve.

Habibie studied engineering and worked in Germany before he returned to Indonesia in 1976 to help build the country’s technology and industry sector under the government of then-president Suharto.

Habibie is credited with democratizing Indonesia after he took office as president to replace Suharto, who resigned under pressure in 1998 amid widespread unrest at the height of the Asian financial crisis.