I spent the whole of last week trying to see how best to capture the near-nationwide stupidity going on in South Africa. But it all ended in futility – until I stumbled on this social media quote that was wrongly attributed to Dr. Robert Mugabe, the ex-Zimbabwean president, who expired Friday morning. According to the quote, “It is only in South Africa that an illiterate villager thinks a medical doctor from another African country is the reason for his unemployment”. Need I say more?

But since stupidity is not a respecter of borders, it is also understandable that the same foolishness that is plaguing them in South Africa also found its way to Nigeria, and fully participated in the retaliatory protest in Lekki, Lagos. For there, the mob did not know that there is such a thing as ‘franchising’ in business, nor that at Shoprite, most of the shops there belong to Nigerians, who pay a king’s ransom for the space to display their wares. The mob did not know that the attack on Shoprite literally amounted to double jeopardy on Nigeria: We lost people and property in the madness in South Africa, and also lost another person (killed by a stray bullet – and we all know the people that fire stray bullets in Nigeria) and property in the Lagos protest. So, to protest the attack on Nigerians in South Africa, we resorted to attacking more Nigerians in Lagos. Unbelievable!
READ ALSO:Do these things, you will never have to worry about your finances

But, back to South Africa. It is in a country of people with an elephantine sense of entitlement that an illiterate Black would foolishly overprice his unskilled labour out of competition for limited job spaces, and then turn around to accuse those humble enough to accept to do the job at a more competitive, more realistic, wage, of taking away his job. The average, illiterate South African in the Black townships wants the good life; women, booze and fast cars. But he does not want to do a great deal for that life. It should just come to him because apartheid once held him down. So, more than 25 years after apartheid, even with all the opportunities that have been offered him to improve his person, he would prefer to remain permanently plastered. And when he regains momentary sobriety, he wakes up with this inexplicable anger against every ‘prosperous’ Black foreigner in sight. Clearly, such Blacks must have come and taken up whatever little crumbs that fell from the table of the White masters. And because of the historical experience where the Whites lumped all Blacks together in the mines and along Colour Bars, the Blacks of South Africa’s townships do not know there’s a difference between legal and illegal immigrants. He does not know that all Blacks are not after the same casual-labour job. That crime (and drug dealing) is not the only way out of poverty for every Black. 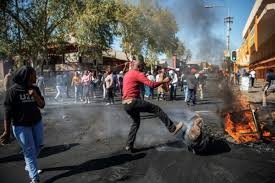 And more questions: If Nigerians are doing drugs, why can’t the law enforcement agencies arrest and prosecute them? When did it suddenly become the duty of illiterate, jobless, drunken and stoned township mobs to  arrest, try and execute ‘justice’ in such jungle manner?

Who, in these mobs of South Africa, can honestly say a Nigerian was given the job meant for him? A job which he qualified to get? And if this is actually true, who is doing the recruiting into these jobs in South Africa? Are they not South African employers?

From the way these Black South Africans carry on, as well as the scarcely veiled narrative certain South African politicians and public office holders are pushing out, you’d almost think Nigerian gangs are patrolling the streets of SA, pointing a gun to the head of South African young men and women and force-feeding drugs to them.

Truth is that most Nigerians create and run their own businesses in South Africa. Those in the employ of the system are occupying position for which South Africa has yet to acquire the relevant competence. So, if Nigerians leave South Africa today, most of these jobs the Black mob is eyeing would also disappear. And these rioting Blacks would also not get the high-end jobs that are presently being done by Nigerians. Other foreigners would take up the positions. And the drugs? The South African drug users will always find their fix somehow. But poverty and half education would not let us see through this reality.

I first came face to face with some form of xenophobia several years ago while growing up in Bacita, Kwara State. A particular tenant of ours, a young Nupe man, who always had issues with paying his rent, had this penchant of always grumbling about how we Igbo came to his fatherland (Bacita is a Nupe settlement), took over all the land, built beautiful houses, and were now asking him to pay rent in his own father’s land. In one instance, he openly threatened that his people would soon chase us away and take over all the houses.  According to him, his not being up to date with his rent was not because he could not afford it, but that he just did not want to pay. After that outburst, I began to take more than a cursory interest in that particular tenant’s utterances. They always centered around how the Igbo had taken over everywhere and everything – the markets, the businesses, the real estate, etc.

Not for one moment did he sit back to recall that not a single square foot of land was forcefully taken over; that every plot was fully paid for; and that no government assistance was given to the new owners to enable them develop the property or business. Not for once did it occur to him that his people needed  these ‘foreigners’ to alert the indigenes of what is possible on the land they had left virgin for centuries.

But that mindset is replicated almost everywhere in the country. Every state and every locality is busy today, wooing foreign investors and inviting people from all parts of the country to come explore business opportunities in their areas. However, fast-forward to another 20 years and we would begin to accuse the foreigners of all manner of things, including expansionism.

Even in Lagos, which used to be our federal capital, and received a lot of our national wealth in the development of its infrastructure, so many non-indigenous people have suddenly become unwanted and treated with scorn. They have become targets of both official and unofficial discrimination.

But, on a second thought, one would not want to blame the Yoruba for wanting to run the Igbo out of Lagos. Only a few years ago, a mentor of mine, a Senior Advocate of Nigeria, who is a Yoruba, recounted his experience in Enugu to me. He had learnt that an agency of the Enugu State government was selling some completed residential buildings to members of the public and had indicated interest. But his application, on two occasions, could not see the light of day.  He soon gave up and forgot about it. A few days later, he casually mentioned it to a serving Imo State governor, who was his client. The governor suggested that our Yoruba SAN should play smart by applying through any of the Igbo lawyers in his chambers. He did, and a few days later, the allocation came. The application had suddenly scaled through. Clearly, the Igbo name of the shadow applicant did the magic.  But that’s matter for another forum.

But the reality is that anti-Semitism is on the rise all over the world. It is not too far removed from Donald Trump and his Mexico wall, Britain and Brexit. It is also the reason ultra-right parties are making electoral gains all over Europe. The only difference is that, in Nigeria, we reduce it to even more ridiculous subdivisions – from region to religion, ethnicity to tribe to dialect to religious sect. And we slaughter one another on just any of those grounds.

Yes, the glaring senselessness of what is happening in South Africa today has clearly underscored the stupidity in some of the things we do to ourselves locally in Nigeria. North against South, Yoruba against Igbo, Igbo against Hausa, Fulani against the rest of us, Jukun on Tiv, Ijaw against Itsekiri, Igala against Ebira and Okun, village against village, etc.

But why do we always begrudge the ‘foreigners’ in our midst when they begin to reap the fruit of their many years of labouring and investing in our communities, especially when these foreigners  take up opportunities we have either neglected, lazily ignored, or were even too blind to see?

We are all closet xenophobes. It’s just that Cyril Ramaphosa and his gang in South Africa have, either by commission or omission, elevated it to a statecraft.

Traders, artisans to get N1 billion credit facility in Kwara