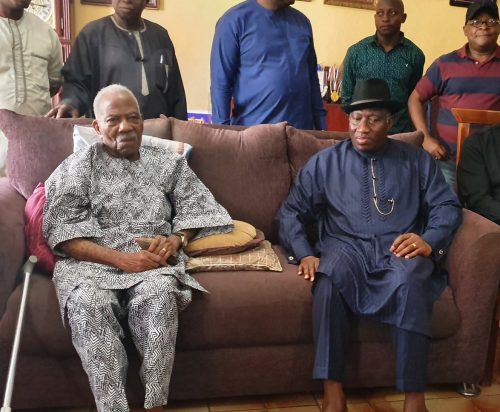 Less than 24 hours after ex-President Olusgeun Obasanjo raised the alarm over the high level of insecurity in the country, former President Goodluck Jonathan lent his voice to the same issue.

When he paid a condolence visit to Reuben Fasoranti, leader of Afenifere, in Akure, Ondo state capital, on Tuesday, the ex-president said insecurity is getting worse under President Muhammadu Buhari.

Although he did not mention the name of Buhari, he clearly referred to the government headed by his successor.

He challenged the federal government to come up with new strategies to tackle insecurity, adding that one could not continue doing old things and expect new results.

Jonathan visited Fasoranti over the death of Funke Olakunrin, daughter of the elder statesman, who was murdered along Benin-Ore highway while returning to Lagos after visiting her father in Akure on Friday.

“The issue of security must be approached from a different dimension. We cannot continue the old way because it is getting out of hand. We hope the federal and state governments will do something about it,” he said.

“Every generation face problems and this generation must find ways to solve these problems. Every government faces problem. The first commercial kidnapping, because it involved money, happened in 2006 when I was the governor of Bayelsa state. From that time, it moved to terrorism in the north. Now, it is a major problem in the country.

“The federal government in conjunction with state government must design a different approach to this issue. I was there as president and security challenge was there but now, it is getting worse everyday and we can’t continue to use the same old method.”

The former president advised the government to create a special security unit to fight banditry and kidnapping.

“I believe the federal government should set up a special unit like we set up EFCC and ICPC to handle corruption cases, so that they will know that their responsibility is to manage this kidnapping, killings and the rest.We can’t continue like this, it is not possible.

“We can’t even talk about managing the economy of this country when people are not save. The economy is for the people, people must be alive to enjoy the infrastructures. If you do all the roads in the country and people cannot move about, the roads become meaningless.

“We should not play politics with serious national issue. If we look at that report, there are recommendations that bother on security and if there is area that need to be expanded because I believe everyday new idea comes, it should be updated. There is nothing wrong holding a specific meeting to look at the issue of security. I believe the federal and state government having a new approach, deploying technology and having more money to protect our people.”