Osolo appeals to LASG over deplorable roads in Isolo 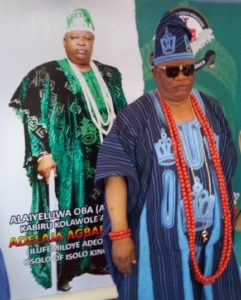 The Osolo of Isolo, Oba Kabiru Adelaja on Saturday urged the Lagos State Government ( LASG) to help in repairing the deplorable roads in the community for improved trade and commerce there.

Adelaja made the appeal at the 15th anniversary of his installation as the traditional ruler of Isolo in Lagos State.

The event was held at the Lagos State Polytechnic, Isolo.

Adelaja said that Isolo community was the most industrialised hub of Lagos State and has continued to contribute immensely to the state’s Gross Domestic Product (GDP).

“We thank the Lagos State Government for their support in the development of Isolo community but I am appealing to them to give us good roads to aid commerce and industry.

“We have a lot of industries operating within the community that count on good roads to aid their operations.

“Our roads are plagued with potholes and these potholes are getting worse especially in the rainy season. Better roads will improve production in the community,” he said.

Adelaja thanked the private companies and the various social clubs operating within the community for their support and contributions to the growth of the community.

He expressed his appreciation to the Alaafin of Oyo, Oba Lamidi Adeyemi, the White Cap Chiefs of Lagos and other traditional rulers for gracing the occasion.