Lagos Govt, Netherlands to partner on health, education, others 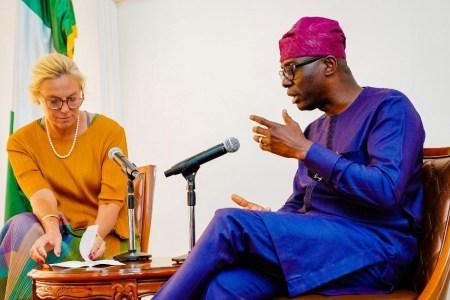 Governor Babajide Sanwo-Olu of Lagos State said on Thursday that his administration is to collaborate with the Netherlands on health, education, technology, trade, tourism and infrastructure.

Sanwo-Olu said this in Lagos while playing host to a team led by the Netherlands’ Minister for Foreign Trade, Development and Cooperation, Mrs. Sigrid Kaag, who paid him a courtesy visit at the Lagos House, Alausa.

The governor said there were investment opportunities in Lagos, adding that the state was home to all, with a friendly environment for foreign investors.

He thanked the team for the visit and said the Netherlands and Lagos shared certain similar features.

The governor explained to them the reclamation efforts at the Eko Atlantic City on Victoria Island.

“You know there is a new development being done at Eko Atlantic City. That is a city that is raised on top of water. It is actually an engineering feat that we are really proud of.

“With technology, you need to sand fill a lot of the place there, it went 12 metres down and has a height of about 9 metres up and that is twice the size of Victoria Island, we poured 10 million cubic metres of sand to stabilize it.

“It is actually an engineering feat that we are really proud of,’’ Sanwo-Olu said.

He also lauded the efforts of the Netherlands on skills acquisition and poverty reduction programmes, which he said had made Lagos State foster economic relations with the European nation.

“On education side, the Netherlands is very good; they develop skills a lot which reduces poverty, hence our aim of partnering with you is to ensure that poverty is reduced by 2030. That is our goal,’’ he said.

Sanwo-Olu lauded the current collaboration with the Dutch government in various areas, including the new Lagos State Health Insurance Scheme, saying a lot was going on to boost the health sector as his administration was poised to give people quality access to health.

“We have just launched early in the year our health insurance scheme which is taking-off well. We also realised that we must tackle all issues of health and its quality delivery at early stages,’’ Sanwo-Olu said.

On water transportation, Sanwo-Olu noted the state was working hard on taking enough space in the waters for dredging, to ensure safety when full blown aquatic traffic begins.

“We are doing a lot of reclamation to safeguard water transportation and water safety. I think these are some of the things we are dealing with to upscale our transport system.

“What I am trying to present is total transportation in all but for available resources. Water transportation is for us and of course, we need to complete our rail projects so that we can have easy movement of our people from one part of the city to the other,’’ he said.

Earlier, the Netherlands Minister for Foreign Trade, Development and Cooperation, Kaag congratulated Sanwo-Olu on his emergence as Governor.

“From what I have heard so far, you are tremendous in your attitude, hence what the people who elected you saw and chose you as the governor of the fifth largest economy in the African continent is not in doubt,’’ Kaag said.

She expressed willingness to collaborate with the State Government to achieve the desired results in areas including maritime, health, education and technology.

Kaag said that Lagos and indeed Nigeria had the potential to shine and lead by example. (NAN)