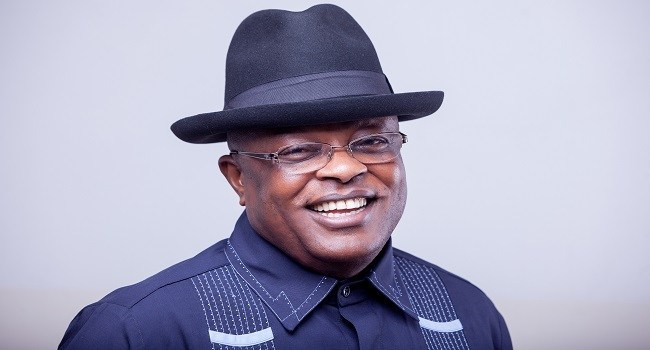 At the well-attended South East Security Summit, in Enugu State, national president of the group, Alhaji Muhammadu Kirowa, told the gathering without mincing words that Governor Umahi is the next president of Nigeria after President Muhammadu Buhari’s tenure ends in 2023.

Kirowa, who was represented by the National Secretary of MACBAN, Baba Othman Ngalzarma, said Governor Umahi, as the chairman of the South East Governor’s Forum, was able to weave an atmosphere of conviviality between Fulani herdsmen and their South East hosts.

The group was impressed that the Ebonyi State governor was able to persuade his other counterparts in the South East to cue into his programme of peaceful co-existence.

“We say a big thank you. We really appreciate your wonderful disposition and your outstanding desires for peace.

“What this country needs are visionary leaders like you,” they told Governor Umahi who was represented at the occasion by his deputy.

The group was particularly grateful to the Ebonyi State governor for cooperation and support he extended to their members in the form of free and compulsory education to their school age children.

Dispelling what it called media hyperbole and spread of falsehood of an imminent invasion of the Southeast by its members, MACBAN said, “South East will not boil. If Southeast is going to boil we will not be at this summit in large numbers.

“South East is also not stubborn otherwise we will not be here today.”

MACBAN posited that if all governors in Nigeria emulate what the South East governors are doing, “Nigeria will definitely come out quickly from the menace of insecurity the country is suffering.”

The group applauded the governments of Enugu and Anambra states “for the establishment of peace and security committees with MACBAN fully represented to tackle any conflict that may arise between our members and host communities and I am sure these committees are working round the clock.”

MACBAN also called on its members to respect the traditions and culture of host communities and be open for dialogue at all times.

“MACBAN stands for truth, just it and equity for all and does not and will not condone criminality even within its own fold.”

Governor Umahi, who was represented by his deputy, lamented that Nigeria is facing a very serious security challenge.

He said in all the zones, there is one security challenge or the other “if it is not rustlers, it is the herdsmen, if it is not bandits, it is armed robbers and kidnappers.

“There are even cyber criminals ravaging the internet.”

He admonished the MACBAN to prevail on its members to always respect the traditions, custom and culture of their communities in order to have a sustainable relationship between the farmers and the herdsmen.

In a key note address by a commissioner in the Police Service Commission (PSC), Tommy Mom commended the Southeast governors for having done so much in the area of security.

“In comparison to most regions, the Southeast is blessed in several ways, but chiefly in the existence of a vibrant Governors Forum that provides the platform for conversations like this summit. The South East is fairly much developed in terms of commerce and standard of living than most zones.

“Ease of doing business in terms of software is taken seriously and now we are including the hardware which is security.

“We can build on this, make our zones better and provide the ideal, for other zones in Nigeria to learn from, and before long, notwithstanding our challenges as a nation, we will have the police and communities policing together, enhancing investments, less persons off the streets, a stronger nation that will be pride of Africa,” he stressed.

The summit was attended by top police officers including the commissioners of police and the representative of the Inspector General of Police (IGP).

Thanks for subscribing! Please check your email for further instructions.