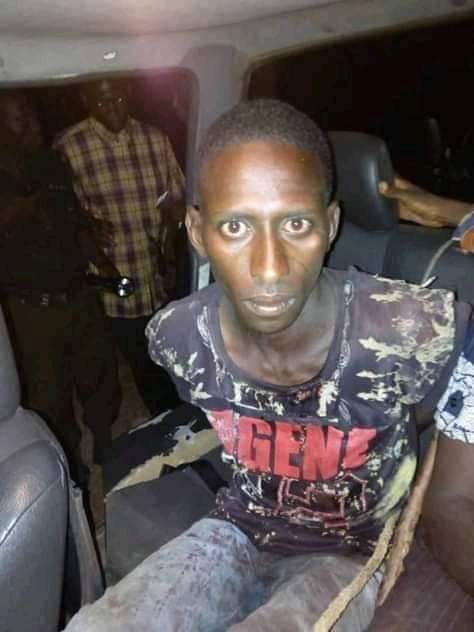 Just as Ilasa-Ekiti in Ekiti East Local Government of the state was enveloped in confusion over the beheading of a young woman at a stream side was also the report by eye witnesses that the unidentified okada rider was hit beside the flyover in Okesa area of Ado-Ekiti by an oncoming vehicle after he disobeyed the traffic light under the flyover.

The accident occurred at 10.38a.m. and the body of the deceased had since been deposited at the morgue of Ekiti State University Teaching Hospital (EKSUTH), Ado-Ekiti.

On visiting the scene by newsmen, the skull of the deceased was seen shattered on the ground and the blood heavily smeared the body of the space wagon that hit him.

An account by a police officer, who pleaded anonymity, but was  stationed under the flyover to  control vehicular movements via the traffic light, said the commercial bike operator was overran by the green colour space wagon with number plate ‘Lagos FF 188 APP’ after riding against traffic light.

The accident resulted in multiple head on collision as traffic was snarled along Okesa-Fajuyi Road, as the car swerved off the road and hit a truck at the back.

The officer, still in the bout of how the accident happened, said the motorcyclist was coming from Okesa-Oluyemi Kayode stadium road on a high speed and despite being halted by the red light indicator from the traffic light rode onto the road.

“Instead of him to obey the red light that had stopped those coming from his side, he decided to circumvent it and rode onto the road.

“And the man that was driving the car had already moved and unexpectedly, the motorcyclist rode onto the road and was hit by the car and he was over-ran.

“We rushed there to save him but he died instantly and the body was taken to the mortuary”.

An eyewitness revealed to newsmen that the driver immediately fled the scene upon realising that the motorcyclist had died.

The Nigerian Xpress gathered that the beheading of the unknown young lady had occurred on Tuesday and has put the whole Ilasa community in confusion.

The victim, who was attacked beside a stream where she had gone to fetch water with her younger sister, was said to be of the same tribe with the suspected herder.

The assailant was said to have ambushed his victim and brought down her head while she bent to collect some water from the stream.

The assailant was said to have taken to his heels after committing the crime but was later arrested through the information provided by the younger sister of the deceased who witnessed the entire scene.

According to reports by some notable personalities in the community including the traditional ruler of the community the Alasa of Ilasa, Oba Ajayi Omolagba revealed that the young lady had in line with their tradition and custom been allegedly handed over to the suspected assailant as a future wife while she was still a teenager.

However, the dreadful episode started last month when the suspect requested the lady to spend the Eld-el-Fitri with him.

The refusal of the family of the deceased to release her before, during and after the Eid-el-Fitri celebrations angered the suspect who assumed the contract had been breeched by the family which resulted in the dastardly act.

Another report had it that the lady after growing up, it came to her notice that the supposed husband was a drunkard and drug addict thereby avoiding him for necessary marriage rites.

In a chat with some relatives of the deceased who did not want their names mentioned expressed sadness over the development.

They affirmed that the suspected murderer made a request to spend the Eld-el-Fitr with his wife adding that the lady was supposed to go to him the next day before he killed her.

Speaking with journalists, the Alasa of Ilasa, Oba Ajayi Omolagba, condemned the incident and said the community had been in shock since the incident occurred.

He said he had summoned the families of all parties involved and their landlords to a meeting where resolutions were reached on how to forestall future occurrence.

Oba Omolagba noted that the community would also make necessary appease to God as such incident was strange and a taboo in the land.

When contacted, the Ekiti State Police Public Relations Officer Caleb Ikechukwu confirmed the incident and said investigation has been launched to unravel the causes of such criminal act while more details would be made available to newsmen.