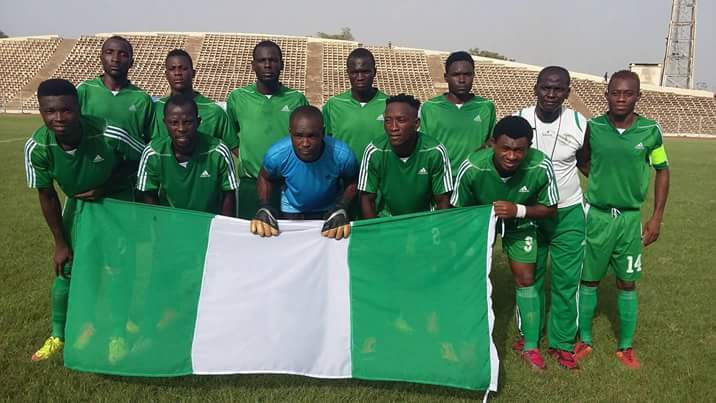 Nigeria is to host Deaf  Football Tournament in November, Amuda Ibrahim, a board member of Confederation for Africa Deaf Sports (CADS), has said.

He told the told the News Agency of Nigeria (NAN) on Tuesday in Lagos that Nigeria’s participation and top ranked record in Deaf Football tournaments earned her the hosting right.

He said that Nigeria was expected to host for the first time in November, the Africa Deaf Football Championship being part of qualifiers for 2020 World Cup and 2022 Deaf-Olympics.

“Nigeria’s Deaf Eagles have been significantly active in West Africa and Africa Deaf football tournaments since the inception of the competition in 2000.

“The team have been in the forefront in all its participation and have lifted the trophy three times and twice finished second position, an outstanding in Africa ranking.

“It was on that note that CADS official ruling body deemed it fit to acknowledge Nigeria’s impressive records by awarding it the hosting right of 2019 Africa Deaf Football tournament,” he said.

Ibrahim who double as president of West Africa Deaf Sports Union (WADSU), said the hosting of the championship in Nigeria was a good one for the country to make history.

He said the development of deaf football in the country which has not been enjoying its rightful place of awareness, would receive adequate attention and attract more upcoming footballers.

“This hosting right is coming with lots of benefits that will bring positive development to deaf football in our country, so I see it as an opportunity develop.

“Lots of deaf footballers are not aware of the activities of the sport, but with this upcoming hosting, the awareness will attract them to build their career.

“The drive to watch deaf footballers on the pitch will attract fans to the sports and some will be inspired to identity with activities of the sport by way of sponsorship,”he added.

He noted that the hosting right from the confederation have been sent to the Ministry of Youth and Sports Development.

Ibrahim explained that the importance of Nigeria in Africa has been acknowledged worldwide, hence it was necessary for her to prepare adequately to host a memorial event. (NAN)