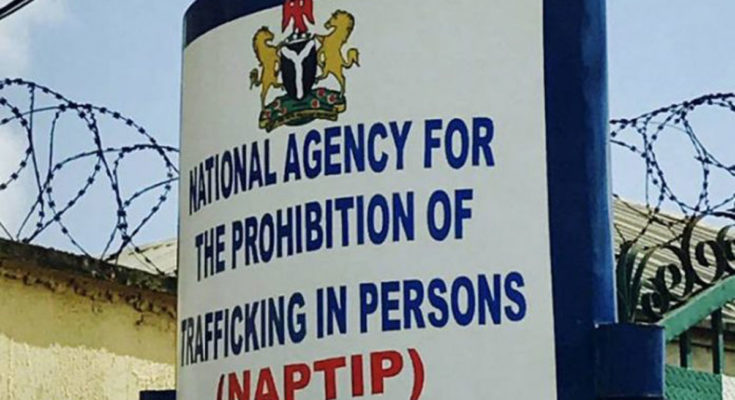 The National Agency for the Prohibition of Trafficking in Persons (NAPTIP) in collaboration with UK Aid, an NGO, officially launched the “Not for Sale” initiative in Abuja.

The initiative is aimed at reducing the number of overseas sex trafficking victims from Edo and Delta.
A press statement issued by Mr Vincent Adekole behalf of NAPTIP and UK Aid said the launch was attended by  NAPTIP Director General, Ms Julie Okah-Donli and John Primrose, Deputy Head of Office, Department for International Development (DFID), representing British High Commissioner to Nigeria.
Also present were Mrs Abike Dabiri-Erewa, Senior Special Assistant to the President on Foreign Affairs and Diaspora issues, Prof. Yinka Omorogbe, Attorney General of Edo State, alongside other stakeholders.
“The ” Not for Sale” initiative aims to inspire, enable and empower young women in Edo and Delta states to find success on their own terms.

READ ALSO;Bayelsa recovers N2.2b from ongoing public sector reforms
“They do not have to pay the terrible price paid by so many others, who look for success abroad,” Adekole said.
He said that a large number of Nigerian women who sought prosperity abroad ended up being trafficked.
“Approximately 80 per cent of Nigerian women who take the dangerous journey overseas end up being trafficked and forced into prostitution.
“The Not For Sale initiative thus provides these women with the support services that enables them to seek out training and opportunities in Nigeria,” he said.
Speaking at the event, the NAPTIP DG, Okah-Donli, expressed delight at the collaborative efforts of NAPTIP and UK Aid in driving positive conversations through the Not for Sale campaign.
According to her, “the initiative is making immeasurable impact in the fight against modern slavery issues and its effect on vulnerable persons, especially young women, in the country.”
She added that, “the Not for sale” campaign provided a platform for stakeholders to forge common ground in enlightening vulnerable young women on the potential dangers of buying into false promises of a better life abroad.
” These range from involuntary servitude to rape, forced marriages and has cost many women their lives ,” she said
She urged state governments in Nigeria to empower women in rural areas through effective skill acquisition programmes which would ensure that they earn good living and in turn, impact their communities positively”.
The event showcased the inspiring stories of young women from Edo and Delta, like Blessing, Gift, Latifah and Gladys who have found success on their own terms.

READ ALSO: Buhari approves appointment of NSITF board
Gift Jonathan said that she only made it to Libya where she was sexually abused and tortured.
She commended the efforts of NAPTIP in enlightening and empowering young women within the society on the need to believe in themselves and engage in worthwhile activities and programmes to better equip them for the larger society”.
She expressed that, like many other young and vulnerable women the desire for a so called “better life” abroad leads to many bad choices.
“But an initiative like Not For Sale should be sought after as one which shines a light on the need for self-empowerment and belief in local development rather than a false promise,”she said.
The event also showcased the Not For Sale website (www.notforsale.ng) which provides women with a number of resources to search out opportunities available to them in their area.
There are many organisations now available across both states that offer services for training and job support such as The Amena Academy and the Tony Elumelu Foundation.
UK Aid is a United Kingdom based NGO which supports civil society organisations working on sustained poverty reduction in marginalised and vulnerable communities. (NAN)

Customs intercepts 113 exotic cars worth over N1. 3b