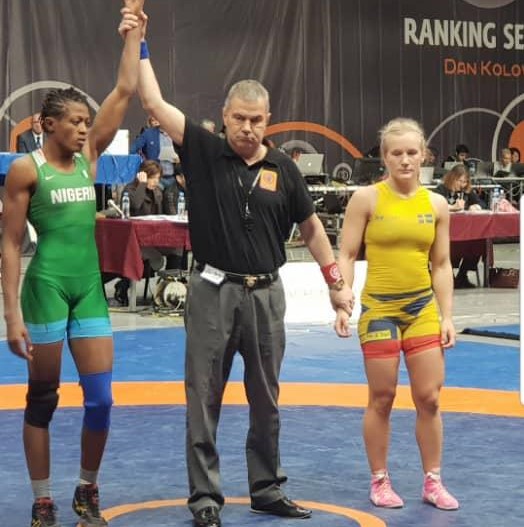 African wrestling queen, Odunayo Adekuoroye, has declared that she would not go to sleep after her splendid performance at the just concluded African Wrestling Championship in Tunisia where she emerged Africa’s best female wrestler.

Adekuoroye said she would use the Tunisia outing to prepare for her next tournaments, which include the All African Games later this year and the Tokyo 2020 Olympics.

The 25- year old wrestler, while thanking all her fans, coaches and sponsors, said she was looking beyond what she achieved in Tunisia.

In her words: “I believe the Tunisia outing is a very good preparation for me for the next tournaments. I want to thank the Almighty God for the huge success; winning my fifth African title and being the best female wrestler of the tournament. It’s a very good testimony for me. I’m so glad and I really want to thank the President of Nigeria Wrestling Federation, Hon. Dr. Daniel Igali, for running around for us to feature in the championship. I want to thank my coach, Purity Akuh, for his tactical ability and instructions. I want to thank my teammates, my training partners; we both made it. And I really want to appreciate my father in the Lord, Dr. D.K. Kolawole Olukoya, and his wife for their support.”

Adekuoroye won her fifth African title in Tunisia after impressively beating her opponents without conceding a point in four bouts. As a result of her superb showings, the 2017 world silver medalist was crowned the best female wrestler of the tournament.

Ahead AFCON draw: Onazi sure of Eagles