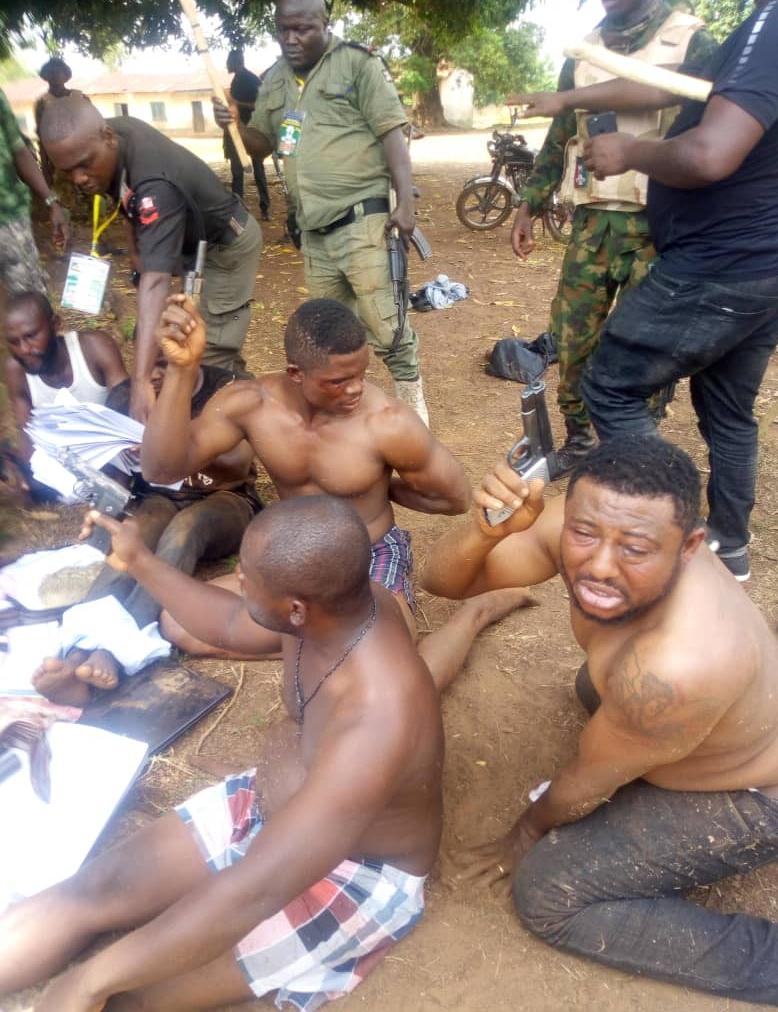 Last Saturday, in Ijigban, Ado Local Government, Benue State, luck ran out of Mr. Alex Oketa, the APC House of Assembly Candidate for Ado in the 2019 election as a joint team of security officials arrested him and his gang  with arms and dangerous weapons  during the supplementary election on Saturday, March 23, 2019.

Recall that during the last Saturday’s Supplementary Governorship and House of Assembly election in Ado LGA of Benue State, a joint team of the Nigerian Army and MOPOL arrested Alex Oketa, APC House of Assembly candidate for Ado Local Government Area and his father, Pius Oketa, who was Sole Administrator in Logo Local Government Council, Rex Anthony Oketa, Raphael Zebedee Oketa, (both brothers) of the candidate, Abuja-based urchin, Mike Ogboji and many thugs before they unleashed violence.

Sources claimed they may have stormed the unit to snatch the ballot boxes at gun point and replace the papers with their APC thumb printed ballot papers and stuff the boxes.

“These same thugs had stormed Ijigban Ward during the March 9 Guber/House of Assembly election, shot into the air, snatched the ballot boxes, caused mayhem and falsified election results, forcing INEC to cancel elections in the affected units and ordered the  last Saturday rerun.

They had reportedly stormed Agbo’s Polling Unit (Ipole 1) on March 9, shot into the air and snatched the ballot boxes and burnt them.

A PDP source said after destroying the ballot boxes, they turned around to the Facebook and blackmailed the Moving Train and even claimed our leader was the one that snatched the boxes. At press time, the APC Leaders are cooling off at the  Benue State Force CID.

Ipole Ijigban is the ancestral home of Dr Francis Ottah Agbo, former Chief Press Secretary to the Governor of Bayelsa State and currently the  House of Reps Elect Representing Ado , Okpokwu , Ogbadibo Federal Constituency. Ijigban and the entire Ado are strongholds of the PDP in Benue State and the Oketas are reportedly frustrated that their son had lost election on the two occasions he ran for the same position.

Preliminary investigations have shown that the APC were on their way to snatch the ballot boxes in Ipole and proceed to reportedly assassinate Dr. Agbo who is popularly called  the Moving Train is also the PDP leader in the area.

In a telephone interview with the House of Reprepresentatives member-elect, he said he has been vindicated.

According to him, ”These people stormed our Ward and particularly my polling unit (Ipole 1) on 9th March in two vehicles after close of voting, best up INEC officials, snatched ballot boxes at gun point and set them ablaze.

“These same people turned around to accuse me of snatching ballot boxes in the cyber space.

“But I cried unto God for justice and He has exposed the Oketas who have even threatened to kill me before my inauguration in June! I have reported the matter to the police and I hope they will do justice to my complaint.”