TALKING SEX: Learn to ask him for sex 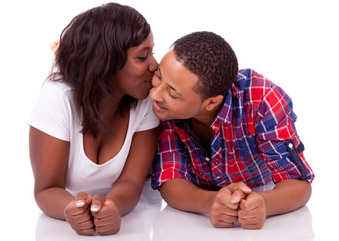 Most of the times, you just discover that you are about to make love because you’re kissing and snuggling, tearing at each other but who initiated it? I am sure the answer is always your husband. Isn’t it very funny that in this jet age, when most women claim to be very exposed, many still shy away from asking their husband for sex? If you think I am blabbing, think and ask yourself the number of times you have initiated sex in your entire married life.

See, it can be great fun to have the table turned around. Men don’t want to be placated; they want to be wanted.

When a man feels a good sexual connection with his wife, he starts to want other forms of intimacy. Not tolerate, want. The need was always there, but it is hard to hear over the much louder need for sexual intimacy.

So, ladies, it’s time to step up to the plate! But how do you initiate sex?

Don’t beat around the bush

If you’re too embarrassed to be direct, then you may try giving clear enough signals.

My husband was leaving for a business trip for a week recently, and he was spending the morning sorting papers and other things out around the house. I kept getting up from my computer whenever he got up from his and walking over and seeing if I could get him interested in something, but I never let him know what I was doing.

I thought he was just busy and wasn’t interested. But after following him around like a puppy dog for an hour, he finally turned to me and said, “are you okay?”, and I said, “I just thought we could go upstairs for some fun before you left.” He jumped on board immediately. I had thought he was busy but he just really didn’t know what I was getting at. Be obvious. It’s easier on everyone!

Play to be in need

Between the two of you, come up with a word or phrase that is a secret call for sex. Make it something that you can say in front of your kids, or even your in-laws.  The contrast between how ordinary the code sounds to others and what it really means to you stirs up excitement and fosters intimacy. Try something like, “Honey, I really need to be in bed early today” or, “I really have a headache!”

Get and stay in the mood.

When it comes to summoning sex, getting yourself in the mood is half the battle.  For most women, the urge just comes in a flash, the next second, the feeling is gone. So, staying in the mood is really important. You are more likely to initiate sex later if you pay attention to your own feelings first.  How do achieve this? Watch romantic movies ahead of time. Read a favourite romance novel or columns on the pages of newspapers (we have them around) to put you in a sexual state of mind. If that’s not your speed, just spend some time thinking in detail about the last time you had sex, which will help rev your appetite.  Some sex therapists also recommend going for a walk to boost endorphins, wearing lingerie to work or even thinking about your favourite celebrity crush. By reminding yourself to keep sex at the forefront of your mind all day, the positive vibes will last well until bedtime, inspiring you to make a move.

If verbal requests for sex are out of your comfort zone, don’t worry; non-verbal initiation can be just as powerful. Try a kiss on his neck or a little ear-nibbling while he’s on the computer or watching TV.

Then escalate the gesture by stroking his arm while you’re sitting near each other. Ramping it up slowly like this serves two purposes: First, the element of surprise can boost sexual feelings; secondly, the non-verbal come-on can be unexpected, which could pave the way for spontaneous sex.

Try something new together.

“When couples do new things together they produce more dopamine, the feel-good brain chemical,” which will help make you feel closer, says Dr. Donald Anurukem of Ayodele Medical Centre, Fagba, Lagos. And if you enjoyed such an outing, it may just help you end up making love when you got home? That tradition will likely catch on, so doing it at your free times will become something you look forward to. Spending time out of the home is another opportunity to develop that feeling

Be generous with compliments.

As relationships progress, couples are often less inclined to court and complement one another. Noticing and appreciating each other’s positive attributes not only fosters affection, but will also remind you both of the early days of your relationship, when sex was likely intoxicating and frequent. The key here is to identify those times that your partner looks sexy or really impresses you, and tell him rather than keep it to yourself.  Try something like, “I was looking out the window when you were mowing the lawn. You looked so hot in those shorts!” Or, “Honey, you just look so sexy to me when you’re cooking us dinner.” That kind of appreciation is an ideal segue into sex.

Try anything that’s out of the ordinary, like hugging him from behind when he’s standing, undressing or just stepping out of the shower will go a long way in sending a message to him. You may even get mischievous by allowing him dress up for his outing and then ask him to come to you in bed. You know men, they are ever ready because he knows that at that point, you are ready and he does not have to go through the stress of getting you into the mood.

Play the “remember when” game.

As you’re sitting on the couch together, or over dinner, recall your best, sexiest memories. “Saying things like, ‘Hey, remember that time when we went to so,so,so place  on that vacation and it took us a whole afternoon to even leave the hotel room?’ That tells him that you are thinking about him in a sexual way. And reminiscing together about past experiences will.