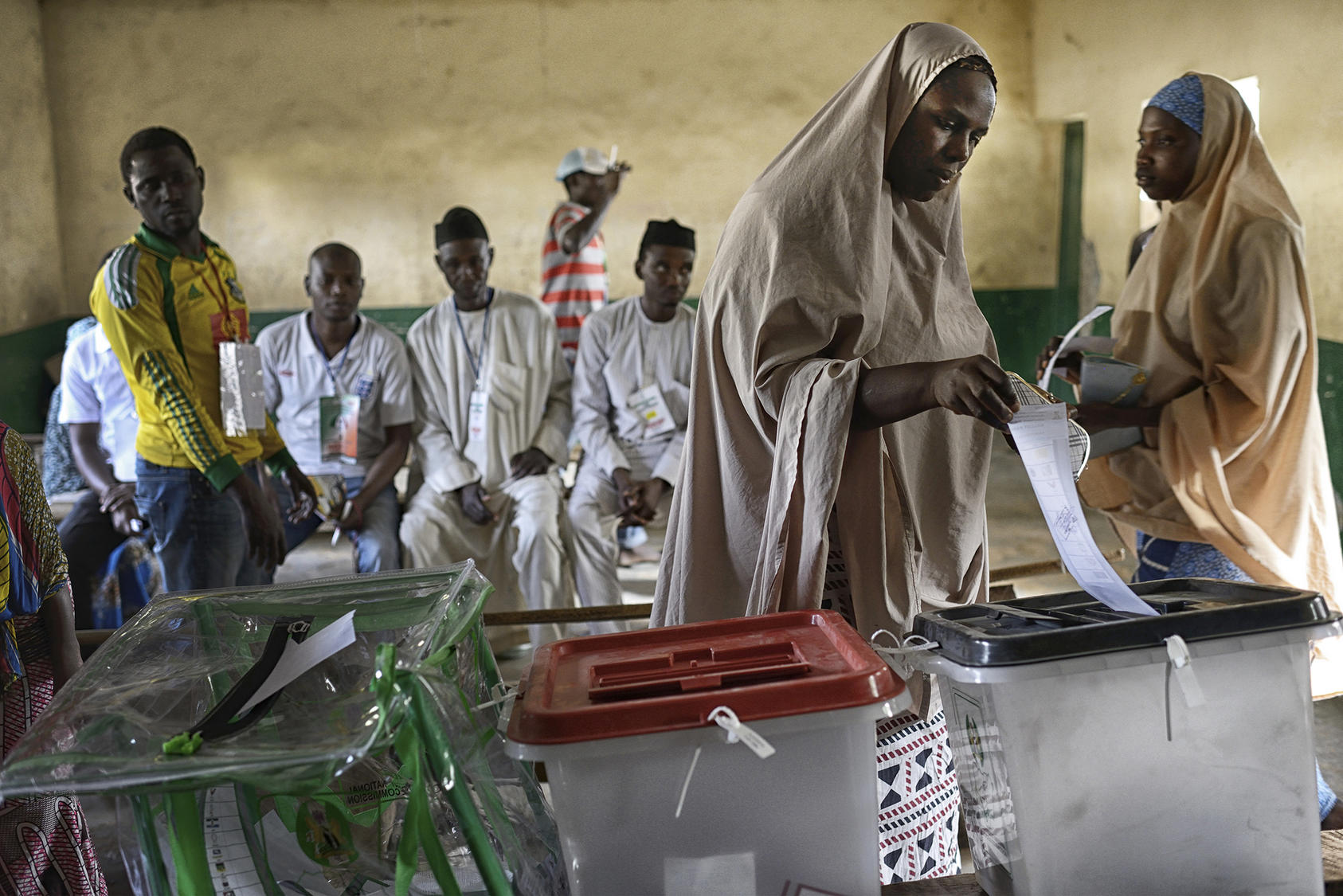 The 2019 general elections were marred by incidents of vote buying despite promise by the Independent National Electoral Commission, INEC, that the odious practice would not be allowed, Akanni Alaka writes.

As Nigerians get ready for the post mortem of the 2019 general elections, an issue that must feature alongside the problems of logistics, violence and militarisation of the poll will be the widespread incidents of vote buying. Attempt by Nigerian politicians to influence the voting behaviour of the electorate is as old as the history of democracy in the country.

Until recent years, that attempt was limited to distributing sundry items like salt, milk, small packs of food items and, even small amount of cash to voters during the campaign periods before the election.

But while this practice has continued, politicians took the attempt to influence voters to a much brazen level, as the INEC firmed up its processes to block avenues for manipulation of results from the polling units.

The new method of vote buying in which agents of political agents carried mint naira notes to polling units for direct payment to voters, who can prove that he or she voted for their political parties became an issue of national concern in the recent off season gubernatorial elections conducted in Anambra, Ekiti, Osun and Ondo states.

But a political analyst, AdeoyeAdebambo, told The Nigerian Xpress that the phenomenon could even be traced further back, noting that a slang as “Jeun Soke, ko Jeun Sapo”, which was popular in Lagos during the 2003 general elections and the subsequent polls were born out of direct payment by parties to voters for votes at the polling units.

Recognising the danger it posed to democracy, INEC and other stakeholders in the electoral process had vowed that they would ensure that nobody was allowed to engage in any form of vote buying during the 2019 general elections.

Speaking at a one one-day public hearing on “Vote Buying and Improving Electoral Processes in Nigeria,” organised by the National Assembly Joint Committee on INEC in December last year, Chairman of INEC, Prof. Mahmood Yakubu, identified methods adopted by politicians to buy votes to include sandwiching of crisp naira notes between slices of bread.

He also listed other items used by politicians to further induce voters on election days to include branded food items, kitchen utensils, automobiles, clothing, and toiletries, even as he vowed that INEC would not allow the odious practice to be allowed to distort the practice of democracy in the country.

“Vote buying is not acceptable; it must never be allowed to define our elections. It is illegal and morally wrong. It denies citizens quality representation and gives us bad name internationally,” he said, adding, “It does not give us a good representation.”

At a meeting with members of the European Union Elections Observer Group in Abuja few days before the commencement of the election, Prof Yakubu had also revealed that INEC had uncovered plans by politicians to use food vendors, as agents of vote buying at polling units during the election.

The Commission had also revealed that it signed a partnership with the Economic and Financial Crimes Commission, EFCC, the independent corrupt practices and other related Offences Commission, ICPC, in a bid to curb vote buying.  The role of the security agencies would be to gather intelligence and monitor the sponsors of vote buying before and during elections, Prof Mahmoud said during the opening session of a one-day training of INEC legal and police officers on prosecution of electoral offences in Calabar just before the commencement of the general election.

So, how successful was INEC? Investigations by The Nigerian Xpress revealed that there was widespread use of money to influence voters during the elections. In Ibadan, a voter confessed that she received N500 from an agent, who wanted her to vote for a political party. She, however, claimed that her voting was not influenced by the money she received.

ing offered up to N10,000 and above in states across the country by party agents, who wanted them to do their bidding.

“The election was characterised by highest bidder in buying and selling of votes with lots of material inducement freely happening within the voting areas,”  Mr. Valentine Ayika, former Anambra State House of Assembly member said while lamenting the malpractices that characterised the March 9 election in his area.

He lamented that most politicians still engaged in vote buying in spite of all the electoral education condemning the act, as a counter-productive on development of democracy in the nation.

But in one of its preliminary briefings on the governorship and House of Assembly election on Saturday, the Centre for Democracy and Development, CDD, noted that the odious practice is a two-way affair, as confirmed by the team of observers it sent around the country.

“The trend, as we observed, is that voters are bargaining for a higher amount and sold their votes to the party with the ability to meet their demand.

He added that CDD’s observers also discovered attempts by politicians to buy off electoral officials at the Registration Area Centres (RACs).

“For example, in a RAC in Ikosi Senior High School, Ikosi-Ketu, Kosofe-Lagos, a presiding officer alleged that politicians offered them N5,000 each, which they refused. “The ad-hoc staff turned down the offer but instead demanded that they should be paid N40,000 while some of them requested N20,000,” he said.

The Professor of Political Science also revealed that the more prominent parties used agents of the smaller parties to carry out the odious act.

He said vote buying prevailed in spite of the warning by INEC, security agencies and anti-corruption agencies.

The Centre had also, in its assessment of the February 23 National Assembly and presidential polls noted that failure to adhere to instructions by INEC on taking of   smart cards readers to cubicles where ballot papers are thumb printed facilitated incidents of vote buying.

“It appears that some voters were able to take their phones into the polling booth, as evidenced by pictures of thumb-printed ballot papers in circulation. Vote buying was observed in some polling units in Bayelsa, Enugu, Kano and Osun states.

Vote buying patterns varied according to geo-political zones. In some places, people were requested to put their names down and phone number after voting so that money can be paid later. Most disturbing is the situation where party agents go around with voters’ register, hustle voters and negotiate for the votes,” Jinadu said.

But just like the INEC promised, EFCC operatives were on the field to monitor the election and to tackle issues of vote buying.

It was also gathered that apart from putting in place a ‘situation room’ for the operation, EFCC also deployed drones for the ‘operation stop vote buying’.

EFCC to the rescue

While acknowledging the efforts of EFCC, CDD observers reported seeing operatives of the Commission arresting some prominent party stalwarts in Benue and Kwara states for vote buying.

For instance, the Commission said it arrested one Sotayo Olatayo Johnson, whom it described as a contestant for the Ogun State House of Assembly with N1.709 million neatly arranged in envelopes stashed in carrier bags during the March 9 elections.

According to EFCC, the suspect was arrested at Ijaiye Park Polling Unit, Abeokuta. It also reported that its operatives arrested one Abdulkareem Abdulsalam for sharing money to voters on Election Day at Unit 7, Kwara State College of Education.

Unarguably, the biggest arrest by the Commission was at the North Bank Area, Makurdi, Benue State where its operatives intercepted bags of cash allegedly meant for vote-buying by a politician.

EFCC has been silent on the owner of the mint cash loaded into ‘Ghana Must Go,” though it has been gleefully celebrating the arrest, as a major achievement in the efforts to curb vote buying.

However, the intercepted cash has been linked to Benue APC gubernatorial candidate.

The Commission has also arrested persons caught in the act of vote buying in Borno and Gombe.

But analysts argued that there is little EFCC and other security agencies can do to curb the rising incident, especially given the continuous evolving way politicians are adopting to buy votes and willingness of voters to sell their franchise.

The fight against vote buying is already looking like a lost one for Nigeria.