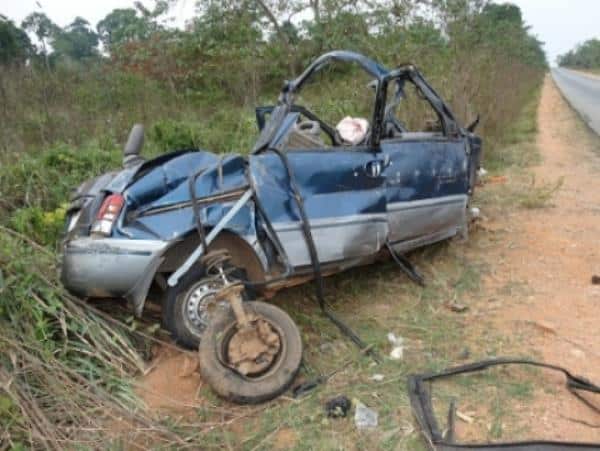 Five years after losing seven-month-old pregnant daughter, her husband, daughter and a teenage family member to the speeding convoy of former deputy governor of Ondo State, Chief Alli Olanusi, families of the deceased are still reeling in pains and agony, not just of the tragic incident but the injustice which has trailed the losses.

The day, according to Pastor Alao, broke like any other and everyone went about the daily activities without any inkling that sorrow lurked in the corner.

“I never dreamt that 2014 or any of my years on earth would find me in this predicament. Like every parent, my daily prayer had always been to be survived by all my children, grandchildren and great grandchildren as that was the promise of God for us in the holy Bible. Unfortunately, this was one prayer point that was not answered for me.

Not only did we lose one of our precious child, we lost her with a seven-month-old pregnancy alongside her responsible husband, her daughter who of course was our own grand daughter and her house help to the convoy of a government official that should be concerned and pre-occupied with our welfare because they are put in the office to cater for we, the people,” said the clergy man, as he went down a bitter memory lane.

The deceased, Alex Akinwale and his wife, Rebecca, both staffers of the Nigerian Television Authority, NTA Akure and other members of the family had, on that fateful day, gone for the burial of a family member in Ondo town.

According to the 79-year-old father of Rebecca, the ceremony went well and the family, in their Nissan Serena car were on their way back to Akure where they lived to prepare for church service the next day.

Ten minutes to their home in Akure, about 11a.m., tragedy struck.

READ ALSO: We murdered hotelier because she was miserly – Suspect tells police

The Nigerian Xpress gathered that from nowhere, the convoy of the then Deputy Governor of Ondo State, Chief Alli Olanusi  allegedly rammed into the car in which the Akinwales rode, wrecking it and killing 34-year-old pregnant woman, her 37-year-old husband, Alex, their 2-year-old daughter, Pauline, and a teenage family member.

A traditional ruler, Oba Taofeek Olaposi, the Osunmakinde of Ife Tuntun was also involved in the accident. Oba Olaposi was travelling from Ile-Ife in Osun State to Akure in a Toyota Camry car with his driver and a young girl. Though the monarch escaped death, he was seriously injured.

Recalling his ordeal, the Oba said: “The incident occurred along Aponmu/Ondo Road in Ondo State. I was also on the road that day on my way to Akure. The journey was going without any disturbance until the sound of a siren rent the air. In a twinkle of an eye, the convoy ran into the vehicles on the way including my own. The Akinwale family’s car was the worst hit. The cars in the convoy went colliding with it, one after the other until they all passed. It was a bad experience. It was very bloody.”

The deputy governor’s convoy, according to the Oba would have saved Alex if they had promptly attended to him. “Instead of them to rescue Alex who did not die on the spot, he was left unattended to. The man, the husband, did not die when people went to check. He was still breathing. But nobody took him to the hospital.

For about two hours, after the incident, the man was still breathing. Had it been that he was promptly attended to, maybe, he would have lived to tell the story. I am really disappointed in the attitude of these people at the helm of government designed to fend for the welfare of the people.

They call themselves government of the people but they are really not. I keep wondering why they have to make so much noise whenever they pass. Mere noise is enough to destabilize any driver least of all reckless and scary driving just to scare people away from the road. It was one sad experience that I really do not want to remember,” he said.

Out of the five occupants, only five-year-old Paul Akinwale was rescued from under the badly damaged vehicle and made it to the hospital alive. The boy, according to an eyewitness was seriously injured and spent months in the hospital going through series of treatments and therapies.

That of course, ended the era of an entire family. Lamenting his loss, the grief-stricken father further said, “I always feel sorry for parents when I hear that their children died but I had no idea that it would happen to me. How on earth would I have thought that my daughter who was heavily pregnant with a child would have her life cut short in that cruel manner?”

There were dreams and promises that Rebecca and her husband could not achieve before their untimely death. Pa Alao told The Nigerian Xpress some of them: “Rebecca was my sixth child. She was a very bright child with good human feelings. She finished from the University of Ado and was very God-fearing. Even when I am personally comfortable, her husband who was not even my own blood child treated me as one. They called me frequently and promised me wonderful things. I really do not know how I will ever get over the loss.”

If Pastor Alao feels this bad, the effect of the loss was worst on his wife. According to him, “She went numb and was unconscious for a long time. Even when she came around, she couldn’t talk and would not eat for a long time. Her other siblings on the other hand refused to be consoled for a long time.”

The Redeemed Christian Church of God where they worshipped and the staff of NTA, though pained, also stood by the family. Alex Akinwale was a long time pastor with the church parish in Akure. He was also the chairman of the Nigerian Union Of Journalists (NUJ), NTA Akure chapter until his death.

When it did not appear that their loss meant anything to the alleged culprit, the family of the deceased who assumed the guardian position for Paul resorted to seeking justice for him. “At first, I did not think of getting any compensation for my loss. All I wanted was to nurse my wound and at least rescue Paul, the only survivor of the sad event from his predicament. I wanted God to avenge my case but whenever I went to see the boy, his condition always made me cry.

This was a boy who would never knew his parents and may never enjoyed true parenting no matter how hard any of his mother’s siblings may try. Besides, he was in pains for many months, he lost years in school and kept on asking for his sister. He has lost good use of one of his legs to an event that was not any of his making.  After I had exhausted my financial reserve and it did not still appear that we were done with the treatment, I began to feel cheated,” Pastor Alao said.

After months in the hospital and therapy facility, therefore, Paul, through his paternal and maternal parents approached the Ondo State Government for compensation for the loss of lives of four people and the seven-month-old pregnancy and the hospital expenses. Their efforts have, however, not yielded any reward.

“First, we were told that no such case would be permitted for a sitting governor. Meaning, he had some immunity that protected him from such a case,” Alao said.

They waited for two years and respite seemed still far away.

As part of the families’ efforts to get justice, the services of Detainees and Indigent Help Centre, a human rights organization was sought by the families. Three lawyers were also engaged to get assistance from the state government at least for the treatment of the injured boy.

Although it has been four years after the incident, the wound still remains fresh in the heart of the two families.

When the current lawyer in charge of the case, Kehinde Aladedutire was contacted, he said justice is what the families want.  “It is sad that the government that was supposed to be committed to the safety of the people had them killed in a manner that was most gruesome. More painful is the fact that the court, which had all along had the case discouraged because of the accussed’s immunity now had the case struck out. But we have filed for an appeal because we are bent on seeing this case to a reasonable conclusion,” he said.

Meanwhile, Pastor Alao, father of the deceased woman wants concerned Nigerians and human rights groups to help look into the matter and redress the injustice suffered by the two families.

Among other things, Alao wanted Paul, the only surviving child of the family to be adequately compensated as he was unjustly robbed of his immediate family. He said: “We are disappointed that up till now Mr Alli Alanusi is yet to identify with this evil he committed four years ago.

I doubt if he remembers at all that there is a young boy who will never see or feel his parents all his life. In the hospital, while the boy was in the hospital, it was only Governor Mimiko that came to check on him, his deputy never came. This is most painful, very unfair. Can there ever be any government without the people? Are these people who got killed chickens or some sort of animals that shouldn’t be cared for? Should other people not ply the road just because the deputy governor or someone important is passing? Should death be the sanction of such a person? It is indeed sad.”

Paul is now nine years old and limps around. He lives with one of his mother’s brothers and is yet to know that the parents he currently sees as his biological parents are actually not. Only God knows how he will take the news when it is eventually broken to him. No one can tell if he would ever forgive those who killed his parents and siblings, born and unborn in that brutal way.”

The clergyman wants a higher authority to identify the extent of the damage that the recklessness of the deputy governor and his culpable convoy officials wreaked on the families of the deceased as well as compute and pay appropriate financial compensation to the survivor particularly. This, he hopes, would deter other government officials from reckless driving whenever they are on official duty and also create a good impression of the government of the country on the boy when he grows up.

“I am an old man who has lost not only a precious child but had her killed alongside her entire family in the most gruesome manner. I spent a lot of money on the treatment of this boy and I am happy he is alive.  I am not demanding for a repayment but my point is whatever is what doing at all must be done well.

The people are the responsibility of the government and this must play up in this case. Anything short of these measures amount to aiding and abetting such dastardly act. It is also an act far from the claim that this government is for the people,” Alao maintained.