Catholic Knights embark on medical charity to the needy 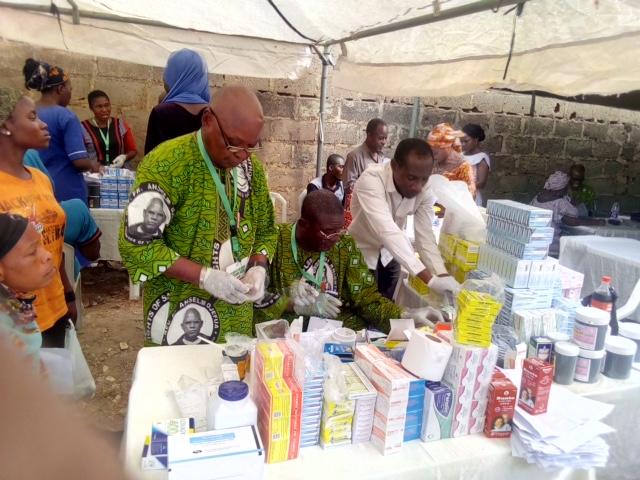 This showed how helpless he was as far as moving about was concerned, no thanks to cumulative effects of ailments described as arthritis, rheumatoid arthritis and osteoporosis. He had been nursing these for long, frequently attending the University of Ilorin Teaching Hospital (UITH), until his resources were exhausted a few months back, leaving him completely helpless as he could no longer access the facilities at the UITH.

If these were the only ailments the father of four was battling with, his case would have been simpler but he was also diagnosed with other ailments, which he was not aware of before until he joined other residents of Ilorin, the Kwara State Capital, at the Tanke Primary Health Care Centre to avail himself of the free medical services provided by the Ibadan metropolitan council of the Knights of Saint Mulumba of Nigeria.

Afolayan was diagnosed with having a lot of calcium in his bone, spine dislocation and frequently suffering from nerve tension.

Of course, he went home smiling as he was given many drugs free of charge and will be further assisted with access to the UITH facilities, being one of the cases of referrals for further treatment.

READ ALSO: How 12 minors were initiated into Awawa cult in Lagos

For Ishola Alaya Abibat, a 42-year-old mother of five and resident of Tanke-Iledu in Ilorin South Local Government Area, the free medical treatment of the Knights was like a balm on her pain. She had been nursing a particular ailment for long with no solution in sight. She was not willing to disclose the ailment to The Nigerian Xpress.

Of course, she could not access the tertiary health care facilities because of financial constraint. The closest to her, Tanke Primary Health Care Centre, is only a mere consulting clinic as far as she was concerned, as there was always no drugs, and other facilities and sometimes, no personnel.

Even the alternative herbal care that is becoming popular as a result of high cost of orthodox medicare is too exorbitant for her to access, compelling her to resort to self-help. Her joy knew no bounds when she heard about the free medical services being provided by the Knights of Saint Mulumba because she was quite sure she would get better treatment without any strings attached.

Like other patients, Abibat was not disappointed but was given drugs and other consumables that would aid her treatment.

The trio of Ishola Alaya, Abibat and Mr. Afolayan M.B were among many residents of Ilorin, who thronged the Tanke Primary Health Care Centre recently to avail themselves of the free medical treatments made available by the Knights of Saint Mulumba, as charity to assist the less privileged and the downtrodden.

The Knights of Saint Mulumba has nine Metropolitan Councils in Nigeria and each council is expected to conduct its Metropolitan Medical Mission every year. These medical missions are part of the Knights’ corporate social and spiritual responsibility and acts of charity in Nigeria meant to ease the burdens of the less privileged. Their motto is to ‘serve and to be served’.

More than five hundred residents of Ilorin among thousand that came for the free medical treatments were attended to. Common ailments diagnosed and treated, according to Dr. Orji Ugochukwu John, one of the medical personnel engaged from the University of Ilorin Teaching Hospital (UITH), included hypertension, diabetes, malaria, arthritis, cataract, tuberculosis, respiratory infection, rheumatoid, osteoporosis, among other silent killer diseases. Children were also dewormed and treated for ailments like diarrhea, etc.

The Ilorin South Local Government chairperson, Hajia Funmilayo Salawu, urged the recipients of the free medical services to conduct themselves well just as she thanked the benefactors for the humanitarian services

The Supreme Physician of the Knights, Professor Charles Eregie, in his remarks described the medical mission, as act of Charity stressing that as a Catholic Knighthood Order, services to the poor is religious duty.

The Deputy Supreme Knight, Dr. Charles Mbelede, described the free medical services as the Order’s contribution to the well being of the citizens of Nigeria.

Among the beneficiaries, who spoke to the reporter after the treatment was Solomon Alice, who gladly showered praises on the Knights of Saint Mulumba for bringing such health programme to the rural areas, calling on others groups in the society to emulate them.

The Senior Special Assistant to Governor Abdulfatah Ahmed, the Kwara State Governor, on Primary Health Care, Dr. Ibrahim Gambari, was among guests, who attended the free medical services. Others were the Chairperson of the Ilorin South Local Government, Hajia Funmilayo Salawu and the Alangua of Tanke Iledu, among others.

Dr. Ibrahim Gambari commended the Ibadan Metropolitan Council of Knights of Saint Mulumba for deeming it fit to choose Kwara State for their medical mission, particularly appreciating them for concentrating on the primary health care, which needs enormous medical resources.

He said the medical intervention of the Knights of Saint Mulumba at the Tanke Primary Health Care Centre complemented the state government’s investments in primary health care in Kwara. He recalls how government’s Community Health Insurance has become successful.

He assured the residents of Kwara of government’s commitment to health sector. He added that the State Health Insurance Scheme recently passed into law would bring down the health cost to the barest minimum.