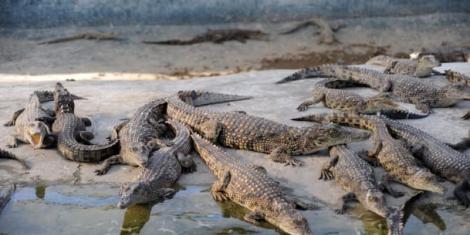 Over 300 crocodiles are being relocated in western India to clear space for a seaplane terminal for tourists visiting the world’s tallest statue, officials said on Thursday.
Crocodiles are large aquatic reptiles that live throughout the tropics in Africa, Asia, the Americas and Australia.
The 182-metre Statue of Unity on the banks of the Narmada River is almost twice the size of New York’s Statue of Liberty and is being billed as a major tourist attraction by the Gujarat State Government.

READ ALSO:Powerlifters have proved they are unstoppable – President PCN
As a tribute to India’s first Home Minister and independence movement hero, Sardar Vallabhbhai Patel, the statue was unveiled in October 31.
It can only be reached by bus from Gujarat’s main city of Ahmedabad, which is about 200 kilometres away.
“The seaplane routes were approved to encourage tourism,’’ NDTV news channel reported.
A pond near the Sardar Sarovar Dam is being cleared of the mugger crocodiles, which are on a list of endangered animals, to allow the terminal.
“We have started relocation of the animals and we are taking care that they are given the best treatment,’’ local Forest Department official, K Sasi Kumar said. Kumar said some of the animals would be transferred to the main reservoir of the Narmada Dam and that there was no specific time-frame within which the process would be completed.
The Indian freshwater mugger crocodile is a protected species under India’s Wildlife Protection Act and is on the list of most endangered animals.
“I don’t think much thought has gone into this, otherwise they could have worked out a terminal without disturbing the crocodiles,’’ environment activist Jitendra Gawali said. (NAN)