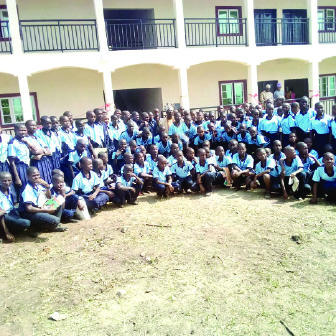 Oke-IlaOrangun, a sleepy town in Ifedayo Local Government Area of Osun State was agog recently when eminent dignitaries from different walks of life stormed the town to celebrate the education legacy being set by the traditional ruler of the town, Oba Adedokun Abolarin.

It was the commissioning of a two-storey classroom block donated by Grooming Centre, Lagos, to the college with a view to promoting education for the less-privileged children.

Oba Abolarin has a burning passion for education for the less-privileged. If there is anything that gives him sleepless nights, it is indigent children’s lack of access to education and the proactive measures that he must take to guarantee their access to education.

The monarch believes that education is not only for the children of the rich, but also for the less-privileged.

For Oba Abolarin, anything that is a barrier to the education of an indigent child is a battle that must be fought and won to ensure that they are educated.

Against this background, he singlehandedly founded Abolarin College in his town, Oke-Ila Orangun, in 2013 where indigent children from different ethnic backgrounds obtain secondary education on scholarship.

At Abolarin College, Oke-Ila Orangun, it is free education for the less-privileged children.

The only condition for admission into the college is that the child must be a brilliant pupil in primary school and an indigent that does not have the means to go to secondary school. The child could be an orphan or one whose parents are poor and don’t have the wherewithal to send him or her to school.

In a chat with The Nigerian Xpress, the monarch said part of the factors that fired his passion to found the college was to democratise education.

It is on this premise that the gates of his college are open to indigent children from different ethnic backgrounds.

Though the school is located in Yoruba land and the founder (the monarch) is a typical Yoruba man, not only Yoruba but also children from different tribes are given equal opportunities for the free education, which covers free tuition, hostel, feeding, uniform, books, etc.

The monarch added that his decision to found the college was to actualise the dreams of the children whom, he said, had been endowed with great talents, which would be wasted if they were not educated.

He affirmed that the effort was geared towards raising great talents and human capital, who would become the future leaders of this country.

“As we harness these children from different tribes of this country and give them access to education, children that would have ended up as thugs, robbers, kidnappers, thieves, paupers, layabouts, would become doctors, engineers, journalists, accountants, architects, lawyers, senators, ministers, presidents and great men, women and leaders of tomorrow,” he enthused.

“What I am doing is a selfless service. All of us have the mandate to do this by building the human capital for tomorrow and posterity so that the talents and future of these children will not waste. It is a duty that we owe the nation. We are all leaders. Government alone cannot do it. We have to complement their efforts.

“It’s a divine calling and a mandate for me to do it. I owe this generation a duty to do this. We want to democratise education. That is why we bring children from different tribes of this country to benefit from it.

“I am not a rich man but I can do what I am doing maybe because of my social capital background. I am a social entrepreneur.

“We should think beyond the ordinary and what we can be remembered for after we had left here. The future of these children and Nigeria is very important. This should be everybody’s concern, not greed and personal aggrandizement.”

Towards increasing prevalence of family planning in Nigeria:…

Oba Obalarin said that the college was also a training ground where the children are offered training on entrepreneurship and vocation for job creation, self-reliance and sustainability.

“We teach them to be creative and productive. We train them to create wealth in future. We train them as entrepreneurs through vocational programmes.  We also engage them in agriculture.

“We teach and engage them in self-reliance programmes. I am sure that by the time they get to the university, they would be able to survive on their own,” Oba Abolarin said.

Scores of the students of the school in voices laden with emotion applauded the monarch whom they described as their father and benefactor.

Amid tears, the orphans among them said that without him, they wouldn’t have had opportunity for education in their lifetime.

They promised to work hard in their studies and make him, their families and the society proud of them in their future endeavours.

Several dignitaries also commended the Oba Abodurin for the legacy and promised their support.

A supporter, who preferred anonymity, donated hundreds of Yoruba books to the school.

Erstwhile Interim APC National   Chairman, Chief BisiAkande, who commissioned the classroom block, also commended the monarch for what he described as his giant stride to singlehandedly found a college for indigent children.

“The Kabiyesi is building a legacy of greatness. He is working for a noble cause. I pray that the Academic Staff Union of Universities (ASUU) will not destroy the ambition of Kabiyesi in the future with its incessant strikes,” he noted.

The erstwhile governor of Osun State condemned the ongoing strike embarked upon by the Academic Staff Union of Universities (ASUU).

According to him, incessant industrial actions by the members of the union had been largely responsible for poor quality graduates, whom, he lamented, are vagabonds and unemployable.

Akande added that the lecturers, who embark on industrial action, were the cause of the unemployment situation in the country “because they produce unemployable graduates.”

He lamented that the lecturers’ demand that culminated in the strike was not genuine, noting: “They are destroying us.”

He said that the strike was a shame on the part of the ASUU and Nigeria too.

Akande noted that it was only in Nigeria that workers would go on strike and come back to earn salary.

“ASUU strike cannot happen in a civilised community. It’s only in a decadent country like Nigeria that people go on strike and come back to earn the salary. It’s shameful of ASUU and it’s shameful of Nigeria,” Akande said.

“People go to the university and come back with half-baked education. They are teachers of vagabonds and that is the truth. That is why Nigeria is becoming worse.”

While also commenting on the unemployment situation in the country, Akande said: “They caused the unemployment. Going on strike six months out of one year, makes them produce unemployable graduates. They are destroying us.”

“Their demands are never genuine. It’s because government employed them. That is why they are doing that. Why can’t they come together and found a university?”

Towards increasing prevalence of family planning in Nigeria: Experts canvass for…