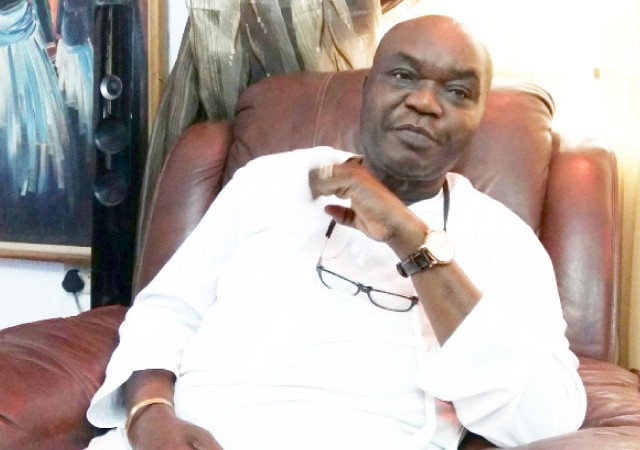 Charles Idahosa was a Democratic Peoples Party, DPP, candidate in the 2007 governorship election in Edo State. He was later appointed special adviser on political affairs to the immediate past governor of the state, Adams Oshiomhole. He is now All Progressives Congress, APC, leader in Uhunmwonde Local Government. In this interview with journalists in Benin-City, he spoke on various issues, including the need for Nigerians to re-elect President Muhammadu Buhari. Enahoro Ojiekere was there:

The general election is few weeks away. How prepared is your party, APC for the elections?

So, we are working, we are doing everything, campaigning and I’m not going to disclose the strategy and the style of our campaign so that our opponents, especially the PDP will not pick it up. But I can tell you that we are ready for the elections. We are working on our campaigns, working across the states, across the country and come May 29, 2019, I can tell you that President Muhammadu Buhari will be sworn in and continue as president of this country for the next four years.

What advice do you have for politicians during this campaign period?

We should avoid violence; put your views across, run issues based campaigns and not business as usual when you can fake news or give hate speeches. The campaigns should be issues based. But as far as I am concerned, the 2019 general election is based on characters and integrity.

The election is between a man with integrity and that without integrity.  What I am trying to say in a nutshell is that this year’s presidential election is just for two candidates; President Muhammadu Buhari of the APC and former Vice President, Atiku Abubakar of the PDP. We all know what happened in this country in the past 16 years because I was part and parcel of the whole system.

When you now see old leaders, former presidents, all ganging up against one person, the question you will ask yourself is why? Why are they against this man? Abubakar Atiku was vice president to former President Olusegun Obasanjo for eight years.

Go and read ‘My Watch’ written by Obasanjo from page 232 to 234 where he described the now PDP presidential candidate as a very big thief.  He alleged that the money he (Atiku) stole can feed over 300 million people for 400 years. He said that. He also, a couple of months ago, said God will punish him if he supports Atiku’s presidential ambition, and also that he will never forgive him.

So, the question now is what is the desperation all about? To swallow your words against a man you called names and fought.

The question Nigerians should ask themselves is what is he (Obasanjo) doing all these for? Why the desperation? We are in total darkness in Edo State today. Who presided over the commercialisation or privatisation of the National Electric Power Authority, NEPA, and subsequently sold it to their friends?

It is Atiku Abubakar. A pharmacist is the one presiding over the operations of Benin Electricity Distribution Company, BEDC. Tell me what that one knows about electricity. The first statement, he (Atiku) made was that he will privatise the Nigerian National Petroleum Corporation, NNPC, when elected. Don’t you see we will die when there is no light, no fuel? So, Nigerians must shine their eyes in next month’s general elections.

Would you advise President Muhammadu Buhari to toe the line of former President Goodluck Jonathan if defeated in next month’s presidential election?

We don’t have to bother ourselves about that. First and foremost, I will not even think of it because we will not lose the election in the first place. But if that happens, you know Buhari will be the last person to hang on to power. It is so unfortunate, that we Nigerians forget things so easily. I was talking to some friends few days ago, that we can’t remember that we slept at the petrol filling stations few years ago.

Nobody remembered that it took some persons four days to get home during Christmas. This year, you just drove into a filing station and buy fuel and nobody is giving credit to whoever did it. It is so unfortunate. There was a time in this state when a governor was an emperor, with more than 25 motorcycles, 10 in front, 10 behind and others by the side, and nobody remembers that today.

We forget things so easily. Buhari is a man. Though, I am not personally close to him, but I have watched him from afar that he is a man of integrity. For a man to have been minister of petroleum and yet does not have a house in Lagos or Abuja but only in Kaduna and Daura his place of birth in Katsina State. He was a former military governor of North-eastern state comprising five states today; a man that will go to London, and sleep in Nigerian Embassy.

Goodluck Jonathan’s wife went to Hong Kong to be conferred with a honourary degree by one university. She travelled with Air force 11, the biggest plane in the presidential fleet and filled it with women. I wept. Aisha Buhari travels with regular airline. I have seen her with children on queue.

So, these are basic things that I look at, but a lot of Nigerians don’t like that. Nigerians cannot remember that Olusegun Obasanjo shared N50 million to every National Assembly members to give him third term. Till tomorrow, he keeps denying it. Is that the man with integrity?

If we all really think about Nigeria and her progress, please, let give President Buhari a chance. He can’t do more than eight years, and let see if he can make the difference in the next four years. But instead of them to campaign, they are just castigating him.

It was alleged that you are not comfortable with the APC House of Assembly candidate for Uhunmwonde constituency because he did not come from your camp. How do you people intend to resolve this crisis?

That is not true. I sponsored the candidate during the primary election. I am still sponsoring the candidate to be victorious in the election. There is no problem in Uhunmwonde constituency at all. You know when there is contestation, people don’t see the reality.

We have 12 wards in Orhiomwon and 10 in Uhunmwonde. We have one constituency in Uhunmwonde but two constituencies in Orhiomwon. So, they have advantage over us. As such, we sat down together; being the leader of APC in the constituency with other leaders, we all agreed that the House of Representatives position should be rotated among the two local governments every eight years, because if we go into election, the Orhiomwon people will defeat us because they have more wards and more delegates.

Based on that arrangement, His Excellency Pius Odubu, the immediate past deputy governor of the state from Orhiomwon was elected for eight years. After him, Hon. Samson Osagie, who later became minority leader in the House, from Uhunmwonde took over for eight years.

And now, we have Patrick Aisowerien from Orhiomwon in the House, who is just serving his first tenure. So we have told Elizabeth Ativie not to contest because it is not yet time for the Uhunmwonde Local Government Area to contest the position.

As a journalist, what advice do you have for the practitioners?

Are you sure I am still a journalist?

But you people made it impossible for us to function once you are not attached to any medium. I have always corrected that and that is why the Nigeria Union of Journalists, NUJ, as a body is not doing well. Once you are a lawyer, you remain a member of NBA (Nigeria Bar Association) for life just as when you are a doctor, you remain a member of NMA (Nigeria Medical Association) for life too. But for NUJ, unless you are attached to a medium like the Nigerian Observer, NTA, EBS, or NAN….

When I was in NTA, I was very active but once you are not attached to any medium you are not recognised any more. So, we cannot really contribute. You people have to change that because you are still operating as a trade union and not a professional body.

So, I can’t conveniently say I am one (journalist) because we are not active. We don’t pay dues. Neither do you allow us to be part of whatever you are doing. As long as you are attached to a media house, that is when you are recognised, if not, you are not recognised.

1 killed, many injured as APC, PDP battle for control of Saraki’s homestead