2019 budget assessment to be completed soon- Minister of Finance 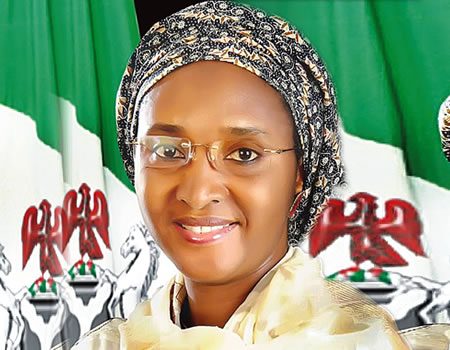 Mrs Zainab Usman, the Minister of Finance, says assessment of the 2019 Appropriation Bill will be completed soon and a report will be rendered to President Muhammadu Buhari.

She said this on Thursday in Abuja, while addressing a news conference on the state of the Nigerian economy.

Usman said the 2019 budget had been submitted by the National Assembly to the president and that they were currently at the final stage of the review to enable the president decide on assenting to the bill that had been presented to him.

According to her, it is expected that this will happen as quickly as possible.

She explained that the law provided for spending the current year’s budget on a provisional basis for salaries and recurrent expenditure, adding that the capital budget for 2018 was still running until the new budget comes into place.

“So we have a situation whereby we have two different periods running side by side, so at any point in time we have a budget that is running.

“The law allows us on a provisional basis to run 50 per cent of the previous year’s provision on the current year’s budget.

“When the budget is assented to, we will now transfer all the transactions that have happened to the 2019 budget, so there is no gap.”

Usman, however, said that the executive would work with the ninth National Assembly, to streamline the process and return to the January-December cycle.

She also said that as at Tuesday, N2.079 trillion had been expended for capital expenditure from the 2018 budget.

On implementation of the new National Minimum Wage, she said that the financial implications had been worked out by the Presidential Committee that was set up and that the report had been submitted to the president.

“We have looked at the report and what we are working on now is how we can finance it.

“Apart from the increase of the minimum wage from N18, 000 to N30, 000, there is also consequential adjustment that we have to negotiate with the labour unions.

“The total implication of that would be worked out only after the negotiations and that would involve determining how much increase every other staff that is above the minimum wage would get.

“It could be a flat amount or a proportion, but the other aspect that is clear is that there would be an increase for the National Youth Service Corps (NYSC) as well because by the Act they should earn at least the minimum wage and the NYSC also has to increase to that N30, 000.

“So, because we have not done the negotiation with labour, I cannot give you the details of what we are projecting because it is simply on projections, at the end of the day, it is what we agree with labour that will be the amount that is due.”

On the issue of debt increase from N12.2 trillion to N23.0 trillion, Usman said it was by design.

According to her, the Economic Recovery and Growth Plan (ERGP) is designed to reflate the economy and plunge the nation out of recession by borrowing in the first to third year and in the fourth year start reducing the borrowing.

She said the borrowing was majorly to finance capital projects, which was why the nation was able to come out of recession.

“The method we adopted helped us but the consequence is this increase in debt and that is why the Ministry of Finance and all its agencies are working to ensure that we increase revenue.

“At 19.0 per cent debt to Gross Domestic Product (GDP), we still are the lowest among our comparator countries.

“The problem we have is a revenue problem and that is why all we are doing is to make sure we enhance our revenue, if our revenue performs optimally, we are in a good place as far as debt is concerned.”

On revenue performance, however, the minister said that from all indications, the nation was faring better in 2019 than it did in 2018.

Usman said that this indication stemmed from the oil production levels which had gone up from an average of 1.9 million barrels per day (mbpd) to 2.1 mbpd.

“While the production volumes have not reached what was budgeted at 2.3 mbpd, the average crude oil price in the global market at 71 dollars per barrel is helping us to balance the shortfall because our budget was cut at 60 dollars per barrel.”

Meanwhile, Ms Patience Oniha, the Director-General, Debt Management Office (DMO) said the 30-year bond that was introduced in April was for the benefit of the Federal Government as it would help in managing liabilities and financing infrastructure.

She added that it was also to encourage the private sector to support economic growth and issue securities in the tenor the government had done.

Mr Isyaku Tilde, acting Executive Commissioner, Operations, Securities and Exchange Commission (SEC), said multiple applications were affecting the quantum of unclaimed dividends and even the liquidity in the market.

He said that the issue of multiple applications came about between 2005 and 2008 in the boom period in the capital market and subscribers used different names to purchase shares which made it difficult to consolidate the two accounts because the names were not the same.

According to him, the names have to be the same before the accounts can be consolidated as there is a forbearance period that will last till December 31. (NAN)