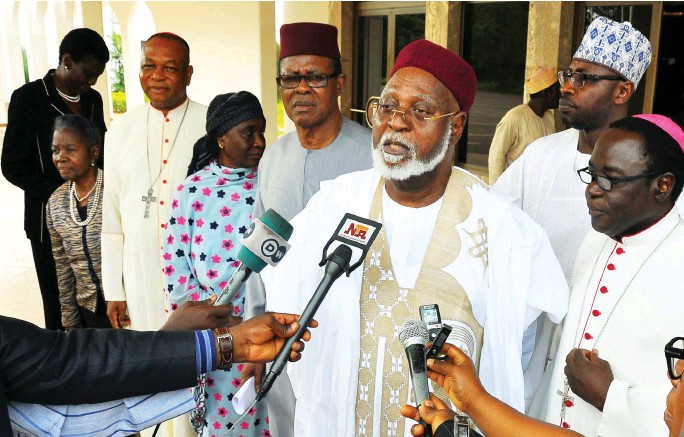 Former Head of State, General Abdulsalami Abubakar, on Friday said he would forever be an enemy of anyone who tries to hinder the democratic development of Nigeria or plunge Nigeria into crisis. Abdualsaslami spoke at at the maiden edition of General Abdulsalami Abubakar Foundation Peace Lecture, organised by the staff and students of the Abdulsalami Abubakar Post Graduate Students’ Hall of the University of Ibadan. The lecture was entitled, “Collaborative Peace Building in Nigeria.”
He cautioned politicians against disrupting the 2019 general elections, saying “we have no other place to run to should the country be engulfed by fire.”

According to the former head of state, Nigeria could not be that great nation we all wanted, except we all agreed to collectively work together and collaborate on peace.

“Peace is not absence of disagreement. Every society must have disagreements. This is because we are not born alike, even twins do not operate in a like manner,” hence there is nothing wrong with people having disagreements.

“What is expected is that when we have disagreements we would find peaceful solutions to the issues,” he said.

Abdulsalami said there could be no sustainable development where people found it difficult to deal with the problems around them peacefully.

“It is therefore, my honest opinion that we are going nowhere until we have a national consensus to work for peace.

“What our politicians should focus upon at a time like this is to be working with professionals on how to make a difference in 2019.”

The former head of state stressed the need for Nigerians to focus more on addressing the escalating development crisis in the land. “No matter how good those managing INEC are, if things are not well managed as they are, it might be difficult for us to have credible elections in 2019,” he said.

He advised the students to reject being used in the forthcoming elections and not be allowed to be dragged into electoral malfeasance and violence. He also appealed to politicians to be more conciliatory in their relationship and public utterances. “INEC must be an unbiased umpire. The security agencies in the country must be fair to all, people must be free to vote their leaders.”

The Vice Chancellor of the University, Prof Idowu Olayinka, praised the former head of state, adding, “it is very rare for a military head of state to say he has to grant the wishes of the people for a democratic government.

“This is the kind of things we need in Nigeria for our leaders to forge peace in the country,” he said. The university presented a peace award to Gen. Abdulsalami, while a cafeteria was built in his honour. Some dignitaries at the event included former minister of petroleum, Prof. Tam David West, the GOC, 2 Division, Fidelis Azinta, former executive secretary, TETFUND, Prof. Suleiman Bogoro and the Oyo Governor, Abiola Ajimobi.

Man United to be without 5 players for Wolves match