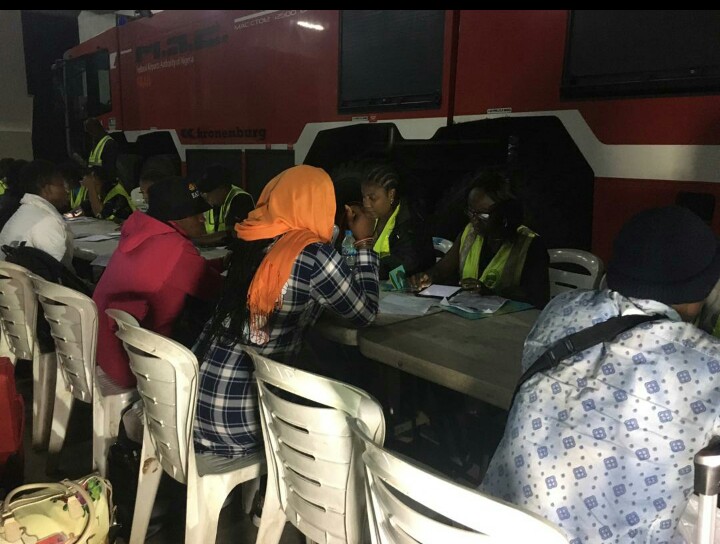 The National Emergency Management Agency (NEMA) on Tuesday received 173 Nigerians assisted to return from Libya, where they had been stranded.

The returnees, who arrived the country in two different flights, were received by the Coordinator, Lagos Territorial NEMA Office Alhaji Abubakar Muhammed at the Cargo Wing of the Murtala Muhammed International Airport, Lagos.

Muhammed said that the Nigerians were assisted back home by the International Organisation for Migration (IOM) and the European Union (EU) under the Assisted Voluntary Returnees Programme which began in April 2017.

He said that 162 of the returnees arrived from Misrata in a chartered aircraft belonging to Al Buraq Air with registration number 5A-DMG, at 4.52a.m.

According to him, another 11 returnees arrived via a commercial flight from Bengazi at 5.15a.m.

“Twenty-one of the returnees had medical issues and were immediately attended to by the medical team on ground,” he said.

One of the returnees, Miss Aishat Areni, from Ogun State, told newsmen that she was deceived with the promise of travelling to New York City, USA to practise catering.

The 23-year-old said her aunt was the person who lured her into the perilous journey, which she got to find out after leaving Nigeria.

“It was my mates that revealed to me that it was Libya that we were heading and I started making trouble that it was USA that I was promised.

“When we got to Libya, I was told that there’s nothing like catering job; that is either you be a house girl or to be sold out to Connection House, which is prostitution network,” Areni said.

The returnee said she worked for one year and three months but paid her trafficker N90,000 monthly for five months.

She said : “I decided to return home because the nature of the work is not ideal for a human being.

” I will advise whoever is thinking of going to Libya never to contemplate doing so.

READ ALSO:We will not reach 80% revenue performance for 2019 — finance minister

“Nigeria is far better than Libya; Libya is dangerous. It is either you are kidnapped, killed, raped or robbed, and there’s bombing here and there. Nigerians are not safe there.”

Areni said her journey back home began after her mother contacted the National Agency for the Prohibition of Trafficking in Persons (NAPTIP) .

“A phone number of a staff of Nigerian Embassy was sent to me and it was the embassy staff that facilitated my return to the country.

” I am grateful to the Nigerian government for helping me back to the country, ” she said. (NAN)