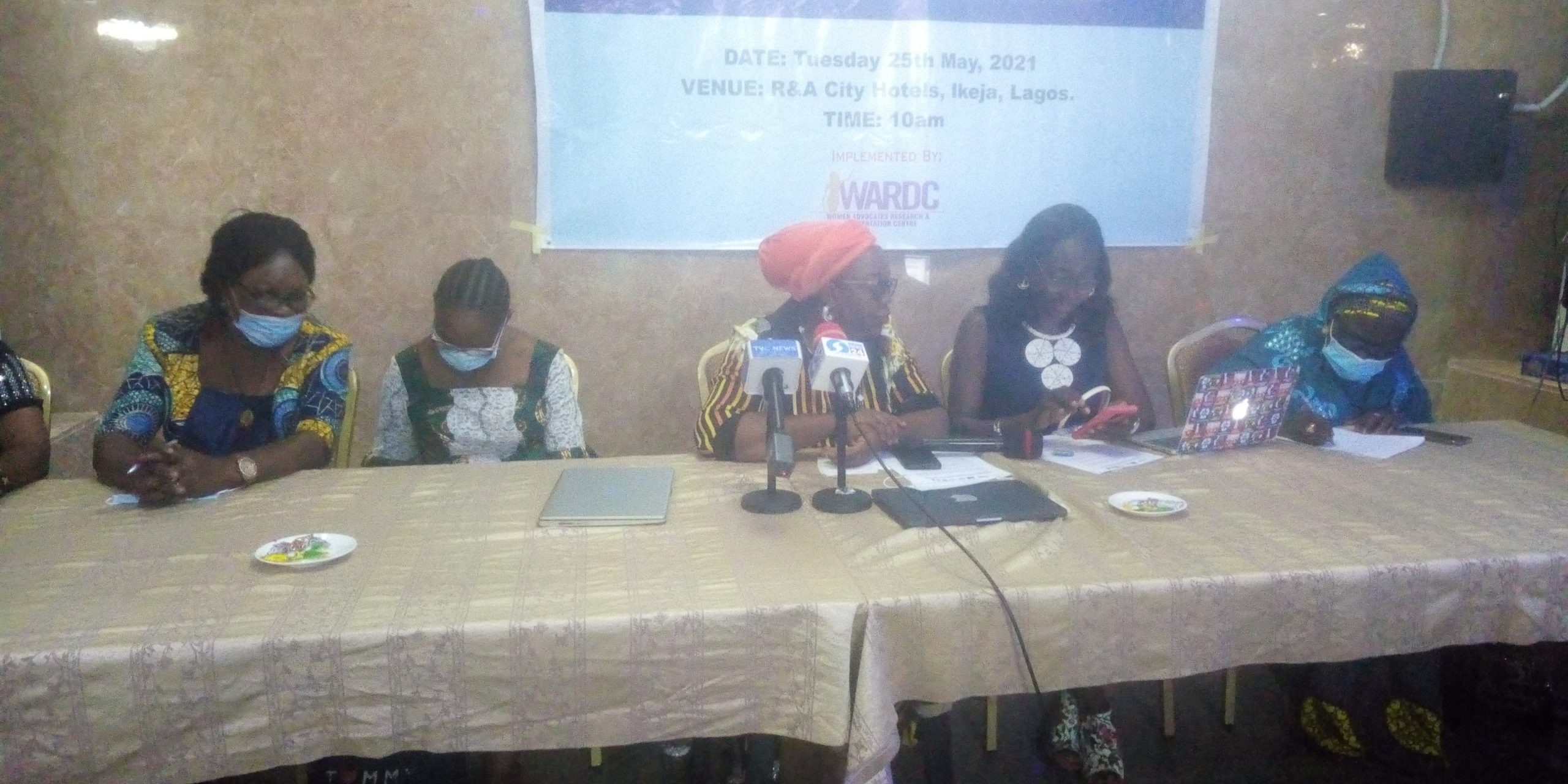 Share
Joy Anyim
Over 100 Civil Society Organisations (CSOs) in Nigeria have called for an amendment of the 1999 constitution to enhance greater women’s participation in politics, as well as promote gender equality.
The CSOs made the call during a press conference on Gender Consideration in the Constitution, organized by  Women Advocates Research and Documentation Centre (WARDC), in collaboration with Spotlight Initiatives.
The Nigerian Xpress reports that 17 grey areas in the 1999 constitution, that has impeded women’s development at all levels, were identified by the CSOs.
The Executive Director of WARDC, Abiola Akiyode-Afolabi, who spoke at the event held recently in Lagos, said that the constitution Nigerian women need is one that ensures gender diversity and takes care of the need and aspiration of all citizens.
According to Afolabi, the constitution must among other things, be amended to protect Nigerian women from sexual and gender violence and all forms of harmful traditional practices and preserve women’s bodily integrity.
Making her remark, she said: “We are demanding for a constitution that speaks to the aspiration of the Nigerian people, particularly the women, who have suffered historical marginalization and exclusion.  We are demanding for ‘The Constitution that Nigerian Women Want. ‘
“We believe that a legitimate constitution is expected to take due account of the socio-economic and cultural realities of its country, reflect the positive values of its culture in order to guarantee the well-being of its society as a whole and social progress, and to safeguard social harmony.
“To be able to achieve this, it is expected that such constitution should guarantee gender equality and strongly uphold the principle of equity in all sectors of life.”
Stating the demands of the CSOs, the WARDC boss said: “The constitution must promote women’s political participation and gender equality in a manner that there will be a male and female in elective and appointive position at all levels. The constitution Nigerian women want demands that where there is a position being taken by a particular gender the opposite must be the deputy.
“In order to promote women’s participation in governance and gender diversity. The constitution women want must provide that no gender shall exceed two-thirds in elective and appointive positions at the three tiers of government.
“ We support the clamour for the creation of additional special seats for women, including women with disabilities, and those who are in other vulnerable groups in the Federal and State Legislative Houses to enable equitable participation and inclusion. However, a more sustainable measure is the provision of 35% or two-third provision in the constitution as a temporary rule as done in other African countries like Rwanda, Eritrea, and Kenya.
“We are concerned about the language of the current constitution because it is largely insensitive and excludes women who constitute half of the population. In the current constitution the word ‘’he’’ is used 235 times while “women” is referenced only twice. The constitution Nigerian women want to see should be inclusive in language and representative.  Masculine languages are gender-biased and undermine women’s and girls’ rights and participation, which further hinders inclusive governance in Nigeria
Related Posts

“Section 14 (3)   of the constitution provides for the conduct of its affairs to be carried out in such a manner as to reflect the federal character of Nigeria as a way of promoting national unity and national loyalty but failed, to identify gender diversity as a rule of equity. A federal character that failed to include the need of critical citizens – women, people with disabilities, ethnic minorities and other vulnerable groups cannot be the hallmark of democracy.
“The constitution Nigerian women want must ensure gender diversity to take of the need and aspiration of all citizens. Chapter two of the Constitution is critical to national development but cannot be enjoyed as a result of the restrictions on its enforceability by the same 1999 constitution that proposes to contribute to citizens’ development. The constitution Nigerian women want must affirm socio-economic rights and a fundamental right enjoyable by all without any form of discrimination.”
While addressing the issue of child marriage, and women’s right in marriage, Afolabi pointed out that the constitution must be firm with the age of adulthood as 18, criminalizing child marriage, while also making specific provisions to protect women in marriage.
She added: “What we want is a constitution that enforces the social-economic rights of all Nigerians including women and children. The Constitution must guarantee equality for both men and women in the area of acquiring citizenship by marriage. Section 26(2) should be amended to confer citizenship by registration to a foreign spouse of a woman just like her male counterpart.
“Furthermore, the constitution women want requires that the age of adulthood should comply with the regional and national standard of 18 years. So, therefore, section 29 (4b) is a violation of children’s rights and should have no place in the constitution Nigerian women want.
“The current constitutional provision on human dignity failed to take into consideration the dignity of women and girls. The constitution Nigerian women want must protect women from sexual and gender violence and all forms of harmful traditional practices and preserve women’s bodily integrity.
“Men and women must have equal rights in marriage, during marriage and dissolution of marriage. The constitution must recognise the importance of registration for any form of marriage be it traditional, religious or statutory marriage as a way of securing the equal rights of both parties and guarantee the equal treatment of both parties in the marriage.
“The new constitution must enact laws that are reasonably necessary to provide for any and all corrective measures, policies, and programs aimed at redressing social, economic or educational imbalances in the Nigerian society.
Furthermore, the State shall ensure the attainment of equal opportunities, protection and fair representation of marginalized groups in all facets of life.”
She noted that if the position of the CSOs were adopted and implemented, the foundation of the polity in the nation will be consolidated.
Noting that gender equality and improved women participation in politics will in no small measure quell the agitation for the disintegration of the country, she also called for the inclusion of all segments of the society in the constitution amendment process to avoid the errors of the 1999 constitution.
“We believe the agitation for outright dissolution of Nigeria being made in some quarters is borne out of the sense of marginalization, injustice, equitableness, and frustration with the present system and once these underlying challenges are substantially addressed, the call for disintegration will evaporate.
“In the process of affecting the above reforms, we will suggest that the process for constitutional amendment should be transparent, inclusive and participatory to avoid the reprehensible circumstance leading to the emergence of the 1999 Constitution which many believed was foisted on the nation by military fiat,” she said.