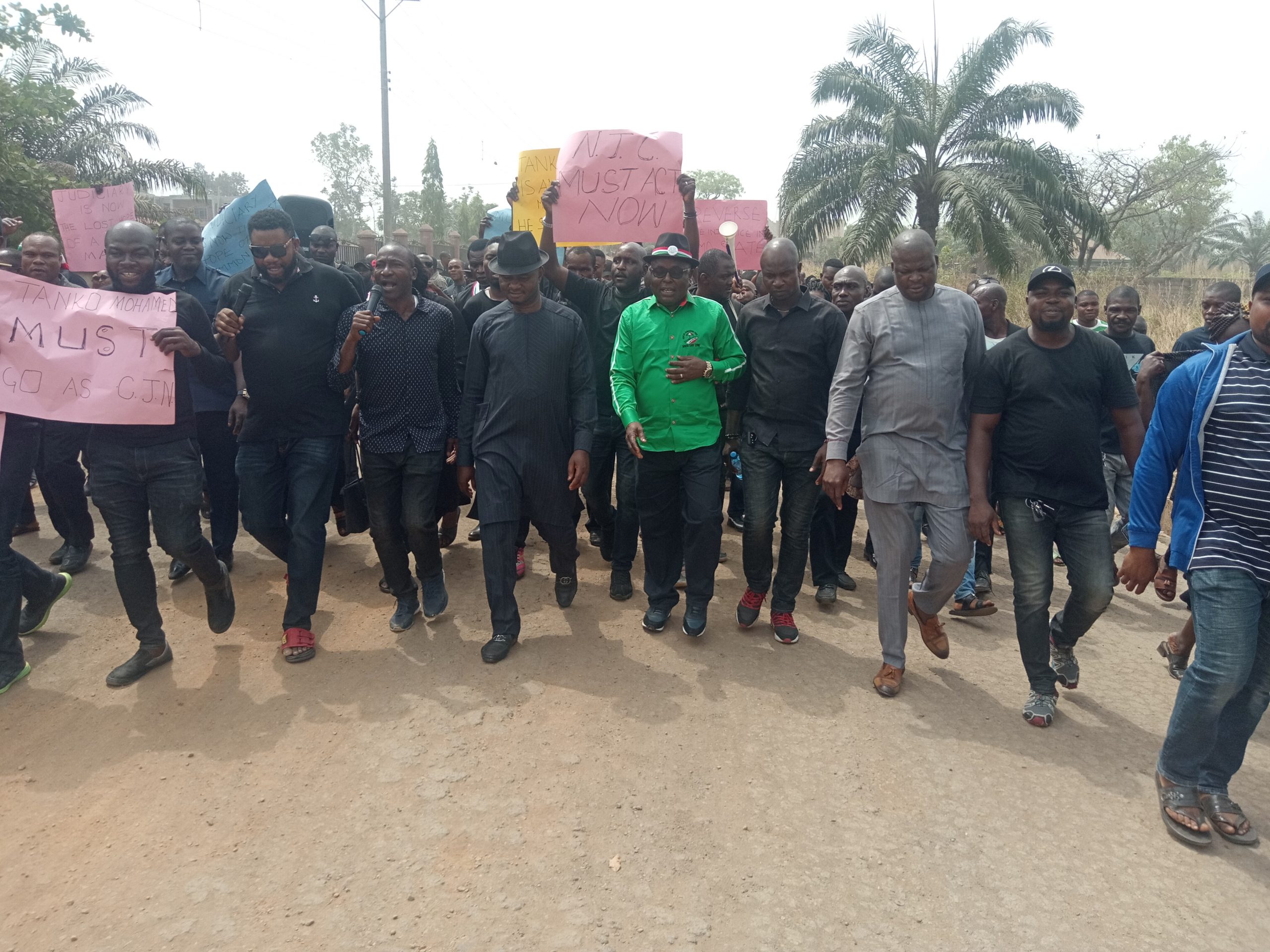 No fewer than ten thousand members of the Peoples Democratic Party (PDP) in Ebonyi State on Monday staged a peaceful protest against the Supreme Court Judgment that sacked Emeka Ihedioha as Imo State Governor, demanding that the Judgment be reversed within 24 hours.

The protesters maintained that the Chief Justice of Nigeria, Justice Tanko Mohammed, must resign immediately over the perversed judgment.
The protesters wore black on black during the protest. They carried placards with various inscriptions such as: ” Supreme Court judgment on Imo Governorship petition must be reversed;, “NJC must intervene; “Justice Tanko Mohammed must resign, Ihedioha must return as Imo Governor, among other inscriptions.

The protesters matched from the PDP State Secretariat along Abakaliki/Enugu expressway, to the Federal High Court, Abakaliki, where they met the entrance gate under lock and key, even staff of the Court were inside doing their legitimate duties. They waited for some minutes chanting demonstration songs at the gate but no one came to receive them.

Not deterred by the absence of the court officials, the National Vice Chairman, PDP, South-East zone, Chief Austin Umahi, who led the protest still passed the message of the protest.

Mr. Umahi said said the Supreme Court must be prevailed upon to reverse the perversed judgment. He said democracy had been murdered under the watch of the Nigerian judiciary, noting that the judiciary had also become the lost hope of the common man.

“For how long shall we continue in sin that grace may abound? And the Bible says, God forbid. We want and we are saying it very categorical that the judgment of the Supreme Court is a perversed judgment and must be reversed immediately, for the oneness of this nation and for the furtherance of democracy. They should reverse and reinstate the man that was elected by  Imolites and he is Hon. Emeka Ihedioha and not a man that was imported and through the back door, imposed on the people of Imo State”

“It is time to rise up and say what is wrong is wrong. We have risen as democrats to say that what is wrong is wrong. To say that we shouldn’t allow our judiciary to die. Once judiciary is captured, we are finished in this country and from all indications, we can see that we have a compromised judiciary. We can see there is no independence again. There is no rule of law in this country.

“So, where are we going as a country? This is worst than a banana republic. You are talking of awarding victory to someone that came fourth in an election? I don’t know where the Supreme Court got that political Mathematics? From all calculations and from all permutations, it is wrong before God And if by 24 hours they didn’t intervene and reverse themselves, heavenly God is going to intervene.

“We want to warn that we are not foolish. We understand what have been going on in this country. If not for the rules of law, will APC be in Government today? A Democrat handed over to them and they have decided to squeeze, undermine us and see that nothing good happens in this country.

“We want to say this. We are disillusioned and disenchanted. We are not happy. We have never seen a thing like this. And I know that the international community will be laughing at us. We have turned to a big for nothing country. It is a country that there is no hope for a common man. It has gotten to a level in this country where you can sit in your house and in the comfort of your home and write election results and the judiciary will approve it.

“That is not right . We must have to get it correct. We need to address it, because if we don’t get it right, there is no tomorrow for Nigeria. Nigeria has no future if we don’t get right today. You may be saying, oh, it is PDP today. But it is not talking about APC or PDP. We are not talking about any political Party. We are talking about Nigeria and the democracy. A lot of persons have died for this democracy and some people want to now rubbish it. They will not succeed”.

Addressing the protesters, the Ebonyi State  Chairman of PDP, Barr. Onyekachi Nwebonyi, insisted that the Chief Justice of Nigeria, Justice Tanko, should resign, as he is not competent to head Apex Court.

“As a lawyer and even the lay man will agree with me that the court of law does not admit evidence that is coming from an unlawful custody. A situation where somebody will come from the comfort of his bedroom to present INEC results and these results were not tendered by an INEC official.

“Now, the question is this: who tendered those results at the Supreme Court? It is a trite law that only INEC official or ad-hoc staff that can tender election results before any Tribunal or any other competent court of jurisdiction.